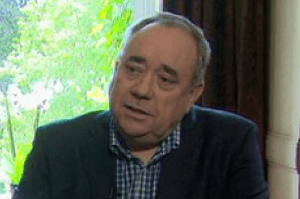 The former First Minister has been criticised for signing up with the station and even members of the SNP have questioned his decision.

SNP MEP Alyn Smyth said “what the f*** is he thinking”, while a Nationalist MP described his decision to sign up with RT as “dangerously undignified”.

Nicola Sturgeon, his successor as SNP leader and Scottish First Minister, said “his choice of channel would not have been my choice”.

A Number 10 source told the Politics Home website: “As members of his own party have urged, Mr Salmond might do well to reconsider his curious decision to host a programme on Russia Today.

“This association with a country that seeks to undermine the international order will worry members of the public.”

Mr Salmond told the BBC: “I appeared on RT programmes when I was still a Member of Parliament.

“It would be a bit strange if I said ‘now I’m no longer a Member of Parliament I’m refusing to make my own show with my own production company over which I have total editorial control.

“If it turns out to be Kremlin propaganda, then people can slate me.”