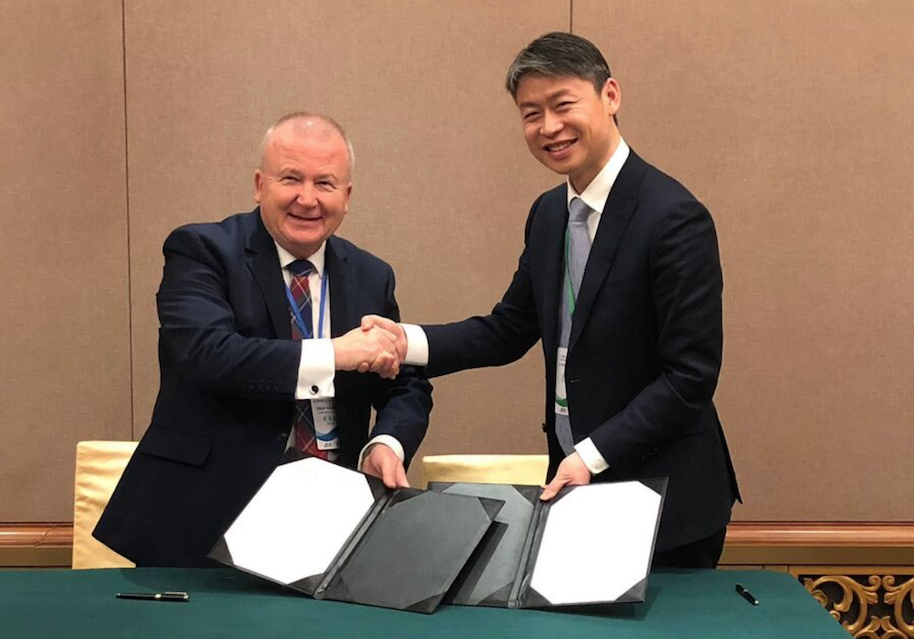 Scottish businesses have been offered an opportunity to secure work on a multi-trillion dollar plan to build infrastructure linking China to the West.

The Scottish Chambers of Commerce (SCC) has signed an historic Memorandum of Understanding with the China Chamber of International Commerce (CCOIC).

The agreement, which was signed as part of the ‘Belt and Road Trade & Investment Forum’ in Beijing, was reached on the eve of a 10-day SCC-led trade mission to Shenzhen, Beijing and Shandong Province.

The mission builds on gains from a succession of SCC-led initiatives in Beijing and Shandong and is expected to deliver substantial trade agreements for participating Scottish businesses.

China’s Belt and Road Initiative, a central policy of China’s President Xi Jinping, is aimed at linking China to the West via a land and maritime infrastructure network across Eurasia.

It is estimated to require between $4-$8 trillion of investment, and offer a wealth of business opportunities to non-Chinese companies.

The signing took place at the two-day Belt and Road Trade & Investment Forum in the Diaoyutai State Mansion in Beijing, attended by around 500 Chinese officials, national leaders and business representatives from more than 70 countries.

The agreement with SCC establishes a platform by which China’s government-led trade body will “provide information and support on trade and investment opportunities” to Scottish businesses “and assist them to overcome problems in international trade and economic cooperation.”

It establishes a pattern of regular meetings between SCC and CCOIC to promote economic co-operation and exchange regulatory, political and environmental information designed to facilitate access for Scottish companies, allowing them “to contribute to increasing business and trade associated with the Belt and Road Initiative.”

Mr Valentine said: “This is an historic agreement that will give Scottish businesses enhanced access to one of the most ambitious and visionary infrastructure plans of the modern era.

“It marks a step change in the development of B2B links between Scotland and China. Forging relationships such as these is the key to improving Scotland’s share of UK trade with the world’s most populous nation.”

In her keynote speech to SAFEA’s Conference on the International Exchange of Professionals, Ms Cameron will praise the progress of Scotland’s commercial, educational and cultural links with China, and underline the attractions of Scottish high-end products and professional services to the Chinese market.

‘The progress of our relationship will depend on the strength of inter-personal relations, and business-to-business organisations,” she will say.