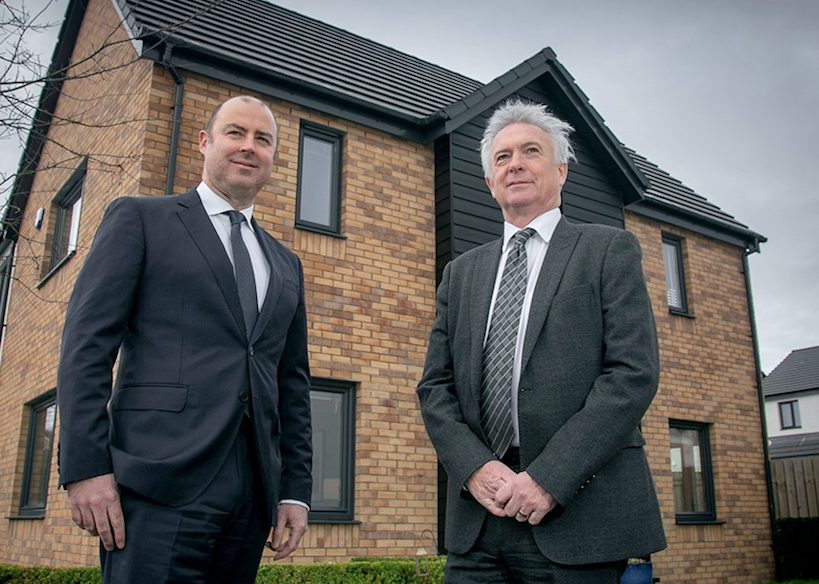 Change at the top: Stuart MacGregor and Glenn Allison

Stewart Milne group chief executive, Glenn Allison, is retiring in March after 30 years with the company and will be replaced by chief operating officer Stuart MacGregor.

With a turnover of more than £280m million the housebuilder and timber systems manufacturer recently reported major improvements in trading performance and a return to profit.

“I’m really pleased that our ambitious plans have paid off and we have grown our group turnover by a third over the last two years alone. We’re now in a very strong position with a more balanced portfolio of developments across those geographic regions where demand for housing is strongest and continued growth in our timber systems business which is meeting the increasing demand for off-site construction solutions.

“This is down to the hard work of everyone in the group but especially the senior management team, led by Glenn.

“Glenn and I have worked closely together for over three decades during which we’ve grown and evolved the business, through good times and bad.

“He has been instrumental to the on-going success of the business and I am incredibly grateful to him for all his hard work, support, counsel and expertise over these years. He will be greatly missed and the whole group wishes him an enjoyable and rewarding retirement.

“Thanks to his leadership, we’re firmly on track with our ambitious growth strategy and well into our transition plan.

Mr MacGregor joined the business as group finance director in 2015.  He has more than 25 years’ experience in business and finance leadership roles, including a successful 15-year career with global brewing giant Heineken, where he worked in several European countries and the UK.

Commenting on his new role, Mr MacGregor added: “I know I’ve got big shoes to fill in replacing Glenn who has made such an impact on the business but I’m looking forward to the challenge.”