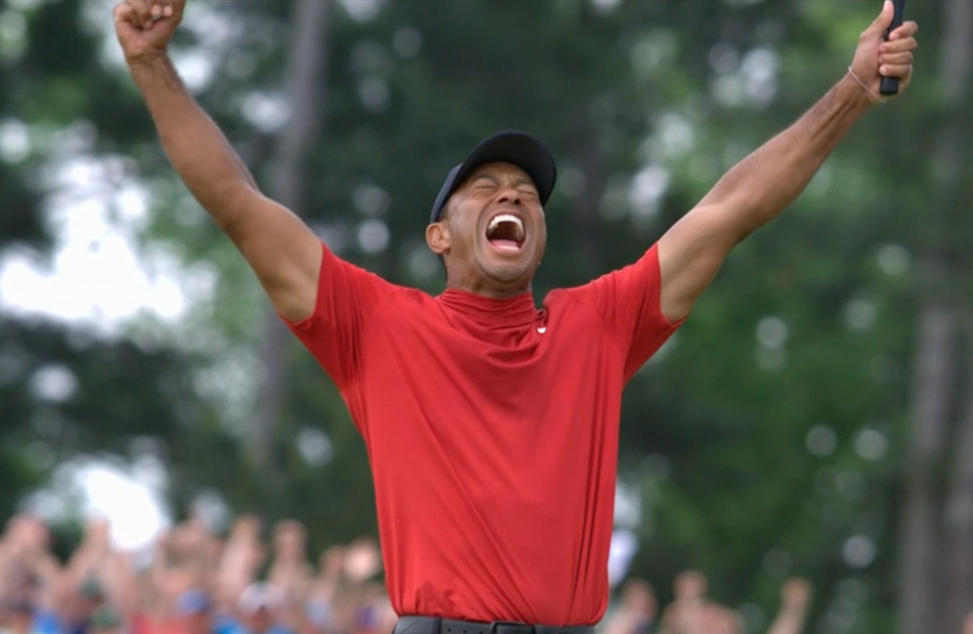 The moment of victory: Tiger Woods celebrates a remarkable comeback

Tiger Woods completed a fairy tale comeback by securing his fifth green jacket in a thrilling final round at Augusta – and produced a multi-million dollar payback for the sponsors who stuck by him.

The American’s first major title for 11 years and first US Masters since 2005 defied growing opinion that his glory days were over.

Woods, who edged closer to Jack Nicklaus’ tally of 18 majors with the win, has fought back from injury and controversy in his personal life to return to the top.

Even so, the 43-year-old kept the crowd on tenterhooks as he gingerly made his way up the 18th fairway and a putt from eight feet skirted the hole before Woods tapped in to claim the prize, finishing 13 under par.

An emotional Woods celebrated with his family behind the 18th green and said: “I was just trying to plod my way around all day then all of a sudden I had the lead.

“Coming up 18 I was just trying to make a five. When I tapped in I don’t know what I did, I know I screamed. To have my kids there, it’s come full circle. My dad was here in 1997 and now I’m the dad with two kids there.

“It will be up there with one of the hardest I’ve had to win because of what has transpired in the last couple of years.”

It was the first time the former world No. 1 had come from behind in the final round to win a major.

“There were so many different scenarios that could have transpired on that back nine,” he added. “There were so many guys that had a chance to win. The leaderboard was absolutely packed and everyone was playing well.  You couldn’t have had more drama than we all had out there, and now I know why I’m balding. This stuff is hard.

“Just to come back here and play as well as I did.  This has meant so much to me and my family, this tournament, and to have everyone here, it’s something I’ll never, ever forget.”

Open champion Molinari had looked in pole position to add a green jacket to his collection but faltered badly after the turn.

Th Italian went into the water at the par-3 12th and the par-5 15th, carding double-bogeys on both holes to take himself out of contention.

“It was just a bad execution (going into the water on 12),” said the Ryder Cup star. “We picked the right shot and just didn’t hit it hard enough, simple as that.

“It was tough today with the wind gusting. I managed to scramble well on the front nine. Just had a couple of mental lapses on the back nine, which were costly.

“It’s great to see Tiger doing well. The way he was playing last year, I think we all knew it was coming sooner or later. Maybe next time would have been better for me, but it was nice to be out with him, he played well, hit the right shots at the right time and he deserved to win.