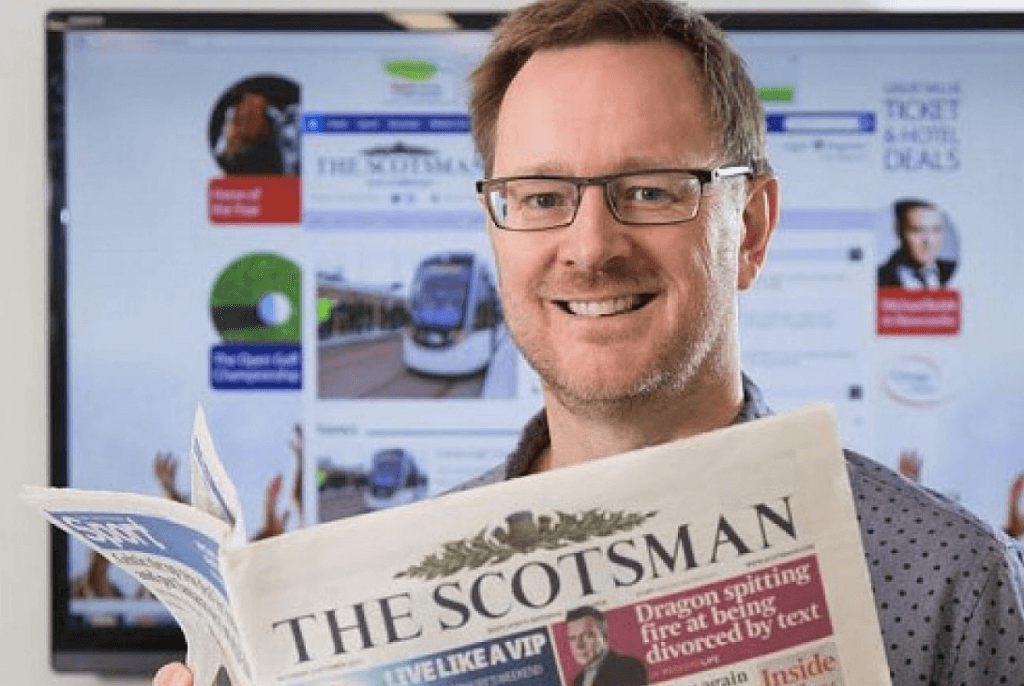 Johnston Press chief executive Ashley Highfield will leave the company next month and will be replaced by chief financial officer David King.

In a statement the publisher of The Scotsman titles and the ‘i’ newspaper said Mr Highfield has resigned ‘for family reasons’  and in order to “fulfil his plans to transition to a be a ‘plural’ non-executive director as the next phase of his career.”

He will not put himself up for re-election at the AGM on 5 June and will leave the company on that day.

He will not receive any salary after this date and there will be no further payments in lieu of notice. He previously decided to defer his bonus of £249,000, granted to him in respect of achievement of 2017 targets.

Mr King will step into the role of CEO with effect from the AGM and his replacement will be announced in due course.

Camilla Rhodes, chairman, said: “On behalf of the Board, I would like to thank Ashley for his significant contribution since becoming CEO in 2011.

“We are sorry that he felt that his personal circumstances required a change at this time. Ashley oversaw the successful acquisition of the i newspaper, has driven growth in our digital footprint, while making substantial progress in reorganising and restructuring our business.

“We wish him every success in the next phase of his career. I am pleased to announce that David King will step up to become CEO. David has worked closely with the board on our strategic review of financing options.

“I am confident that David will prove to be a strong leader and his transition to the CEO role provides stability to the business at this important time.”

Mr Highfield said: “I have been privileged to lead Johnston Press during a period of unprecedented turbulence in our industry. Since 2011 we have grown our overall audience in particular our digital business, created an industry leading tele-sales operation and maintained margins.

“The acquisition of the i newspaper has been a particular highlight. I am proud of what the board and my colleagues have achieved and would like to thank them all for their support. I wish David every success in his new role.”

Mr King is a chartered accountant. He joined the company in 2013 as CFO. Previously, he was CEO at Time Out Group, the print and digital entertainment information business and CFO of BBC Worldwide. He previously worked in financial services and as a management consultant with Coopers & Lybrand (now PwC).

Mr Highfield last month unveiled annual figures showing a reduction in losses and growth in the group’s digital businesses. He gave no indication that he would be stepping down.

In November, the board fought off an attempt by an activist shareholder to remove key board members. It said a requisition notice received on 6 November from Custos Group, the investment vehicle of Norwegian investor Christen Ager-Hanssen, was invalid.