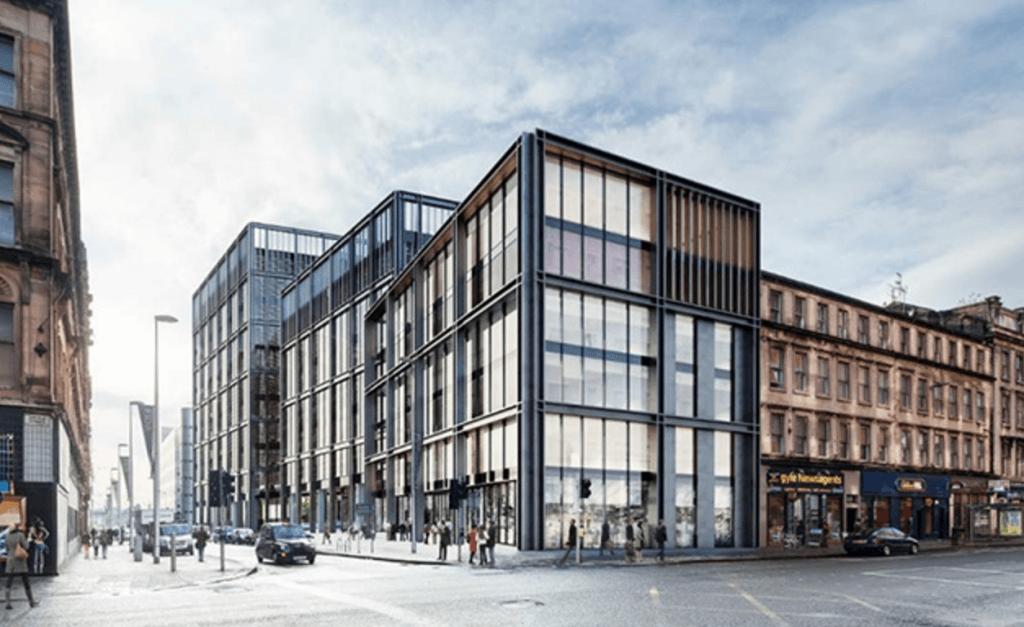 HM Revenue and Customs (HMRC) has confirmed that it will relocate hundreds of staff to a 10-storey office development at Atlantic Square in Glasgow.

The Government Property Unit (GPU) chose the building last year from a shortlist of three. It will bring together 2,700 staff from offices currently scattered around the west of Scotland.

BAMTCP Atlantic Square, a joint venture between BAM Properties and TCP Developments, and LGIM Real Assets have confirmed that work will begin on the 284,000 sq ft building next month. HMRC will take 187,000 sq ft on a 20-year lease.

Atlantic Square is the tenth of 13 new regional centres being created by HMRC across the country.

HMRC is also moving  2,900 tax staff into new space being developed in New Waverley, Edinburgh, two in London, and others in Bristol, Cardiff and Liverpool.  It is looking at other schemes in Belfast, Birmingham, Leeds, London and Manchester.

Steven Boyd, HMRC Estates Director, said:  “I’m delighted to confirm Atlantic Square as our tenth regional centre. HMRC has a significant presence in Scotland and we are pleased to grow upon this in Glasgow.

“The development will help continue HMRC’s transformation into a modern, digitally-advanced tax authority thanks to the site’s high specification office space, central and accessible location and digital infrastructure.”

BAM TCP Atlantic Square is also speculatively developing a second building comprising 96,650 sq ft of high-quality office space and which will be complete and ready for occupation in 2020.

Dougie Peters, managing director of BAM Properties, told Property Week: “We are delighted to be working with LGIM and HMRC on this Grade A office development which will become one of 13 state-of-the-art regional centres for HMRC.

“Simultaneously, the BAM TCP Joint Venture is speculatively developing Building 2 at Atlantic Square because we believe there is a high level of demand in Glasgow for premium office space.

“BAM Properties has a long and successful history of knowing when the time is right for major commercial developments in Glasgow – such as 110 Queen Street and the Clarion Building and we are confident that Building 1 and Building 2 at Atlantic Square will be equally good news for Glasgow.”

The buildings have been designed by concept architects Cooper Cromar with further refinement by BAM Design and the scheme will be built by BAM Construction.