SNP accused of 'sop' to Greens 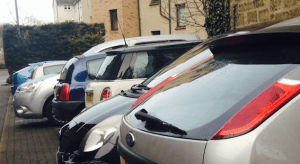 The SNP’s plan for a tax on workplace car parks is short on detail and could prove difficult to implement, according to Scottish Conservatives.

The plan was announced by finance secretary Derek Mackay as part of last week’s deal with the Green party to ensure the Budget was passed.

But Scottish Tories say Mr Mackay’s support for the idea was “sop” to the Greens and the SNP has repeatedly opposed similar plans, with high-profile figures like John Swinney, Bruce Crawford and Fergus Ewing criticising the idea.

In 2000, Mr Crawford said: “We were never convinced that workplace charging was the way forward. In the same year, Mr Ewing stated charges were “not appropriate” for rural Scotland. Former finance secretary John Swinney warned that some people would park in nearby residential areas to avoid the levy.

Since the announcement in Holyrood, the proposal has been widely criticised by businesses and motoring groups. Aside from an exemption for NHS staff, no details have been revealed.

Scottish Conservatives finance spokesman Murdo Fraser said that if ministers cannot offer urgent clarification on the levy, they should drop it altogether.

He said clarity is also need in rural areas where people often have no choice but to drive to work. He called on the  government to state whether employers will be able to apply for grants; if firms will be consulted on the design of the tax; if the charges apply to customer spaces; and what the tax receipts will be used for.

“It’s blatantly obvious this knee-jerk experiment has been dreamed up in a hurry, and there’s basically no detail at all,” he said.

“If the SNP government doesn’t start answering these questions, the whole tax could fall apart before it’s even begun.

“It’s becoming increasingly clear that the SNP had to throw a bone to the Greens for budget support, and this ridiculous proposal was it. Senior figures in the party are even on record opposing it.

“This is an unpopular idea, and one which will hit the finances of businesses and their hardworking staff. Instead of lumping more levies on businesses, the SNP government should be finding ways to help them thrive.”