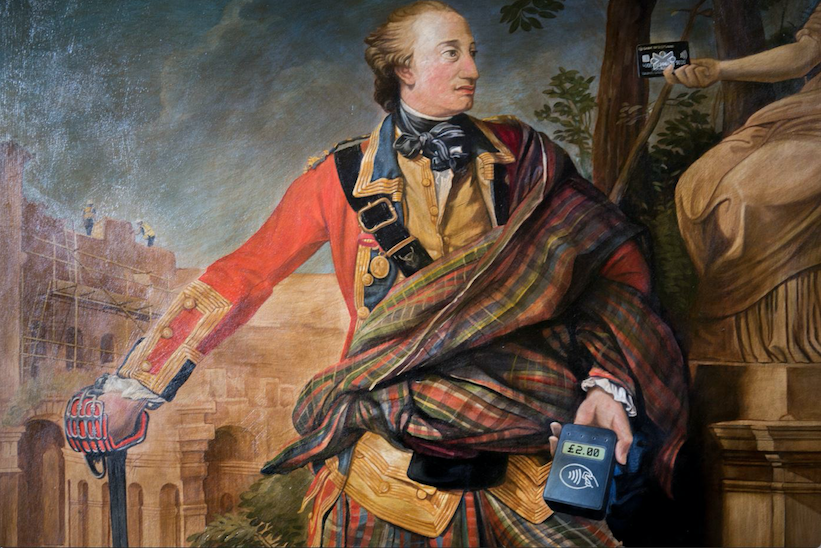 Pay as you view: this recreated painting incorporates a device to encourage contactless donations

Supporters of the National Trust for Scotland will, for the first time, be able to make contactless donations to the charity, thanks to an innovative use of banking technology.

Two Scottish artefacts have been recreated at Robert Burns Birthplace Museum in Alloway and Fyvie Castle in Aberdeenshire with scanning devices embedded in the work.

Visitors can tap the contactless screen just as they pay for other goods and help pay towards important work by the Trust.

The two recreated exhibits are a bust of Robert Burns within the cottage at the Ayrshire museum and a 1766 painting of Colonel William Gordon at Fyvie Castle.

It is hoped that the ‘Tap the Past to Preserve the Future’ initiative will raise vital funds for the charity to support its valuable work protecting Scotland’s heritage for future generations, at a time when the volume of traditional cash donations is falling.

The bespoke creations have been weeks in the making, with the Robert Burns bust formed using the latest in 3D scanning technology to capture every detail of the original.

The makers worked closely with the Trust’s expert property and curatorial staff to create high quality replicas which are almost identical to the original pieces, but with a contactless card reader integrated. Visitors to the sites will be able tap the contactless logo on each object to donate a fixed amount of £2.

This new partnership comes at an important time as, according to research by UK Finance, use of notes and coins dropped by 15% last year.

Meanwhile, contactless debit and credit card payments increased by 97% during 2017 to 5.6 billion, with almost two thirds of people in the UK now making contactless payments.

Simon Skinner, chief executive at the National Trust for Scotland, said: “Like all charities, we face a significant fundraising challenge as cash donations have fallen sharply in recent years. This initiative could not come at a more crucial time and will enable us to accept contactless donations at our sites for the first time.

“It’s only through the support of our visitors, members and donors that our charity can help to protect Scotland’s natural and national treasures, like Robert Burns Birthplace Museum and Fyvie Castle, for everyone to enjoy.

“Working closely with Bank of Scotland and Visa to install these contactless artefacts means even more people can help support all we do, for the love of Scotland.”

Ricky Diggins, network director at Bank of Scotland, added: “Bank of Scotland has been at the heart of local communities across Scotland for over three centuries and we are proud to share the National Trust for Scotland’s deep passion for the heritage of our country.

“In 1786, Robert Burns composed a poem on the back of a Bank of Scotland note, so it is fantastic to see a recreation of him now accepting contactless donations, helping to preserve treasured historical sites in Scotland.”

Mike Lemberger, head of product & solutions at Visa in Europe, said: “Contactless payments are more popular than ever with over half of face to face Visa transactions now made with a contactless card or payment-enabled device.

“Therefore we’re delighted to partner with National Trust for Scotland and Bank of Scotland to provide the charity with a new means of collecting the donations that will allow it to continue to preserve Scotland’s unique heritage.”

Original: sculpted by David Watson Stevenson in the late 19th century (1870 – 1899) using plaster. It is on display in the Robert Burns Birthplace Museum.

Original: painted by Pompeo Batoni in the mid-18th century (1766) during the Grand Tour using oil on canvas. The picture depicts William Gordon as a swaggering Scotsman in the guise of a Roman Hero (wearing the uniform of the 105th Regiment of Foot along with Huntly Tartan), standing before the ruins of the Colosseum sword in hand. It hangs in the Morning Room of Fyvie Castle.

Replica: painted by Jon Rogers, a specialist in painting alternations and replicas based in Kent. Finished with a layer of varnish to create an aged effect. Production took eight weeks and was managed by production company ‘Realise Live’.