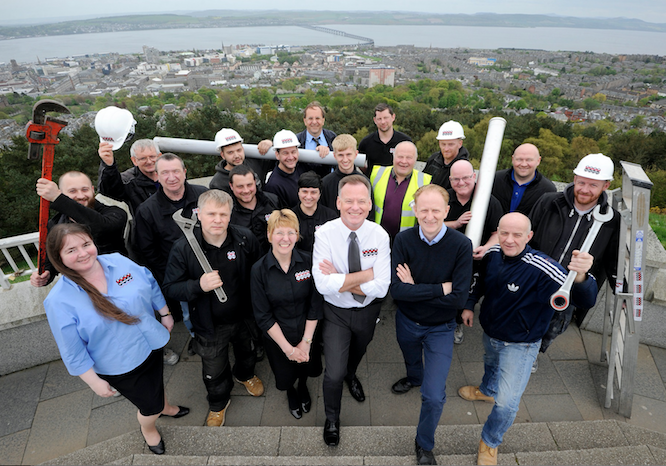 New owners: the team at Scan

Founded in 1980, Scan Building Services operates in the construction industry as a specialist contractor. It has an annual turnover of £3.9million.

Previous owner David Anderson has sold 100% of the shares to an employee ownership trust, which is holding them on behalf of the employees.

The deal was structured in order to make it affordable to the business without affecting its ability to reward the team and reinvest for the future. The plan is to also introduce an Enterprise Management Incentives (EMI) scheme for senior management.

Graham Prophet, part of the senior management team at Scan Building Services, said:  “When we were considering our options for future ownership of the business, we wanted to ensure the jobs were retained in Dundee and the staff were rewarded for any success.

“Employee ownership ticked all of those boxes and following a feasibility study last year, we knew it was the best option for us.

“A fair price was achieved for the previous owner that also ensured sufficient reserves were left in the company to provide working capital to invest for the future.

“We notified the staff early on in the process and made sure they were involved and updated as the project progressed.  All employees now have a real interest in the success of the business which will motivate them to perform and achieve.”

The transition to employee ownership was supported by Co-operative Development Scotland (CDS), with the process managed by Henderson Loggie.

Rod Mathers, partner at Henderson Loggie, said:  “Employee ownership is a very tax efficient option for business owners to realise their investment and pass ownership on to employees to reward and motivate them to continue to grow the business.”

Scan’s previous owner, David Anderson, said: “Rod Mathers suggested this very effective structure which met my objectives and allowed ownership of the company to pass to the employees, who now have a vested interest in making it the best company it can be and to benefit directly from their efforts.

“I’m very proud of the way things have worked out and I wish the new owners of Scan every success for the future.”