Optimism’s on the rise in the land down under

There’s always two ways of looking at things. That’s what separates optimists and pessimists. Back in the mists of time, 1991 when I was still young… stop sniggering at the back! … commentators were obsessed by recession fears following the “The First Gulf War” when Saddam Hussain tried to roger Kuwait and thought nobody would notice.

Ever the optimist, I wasn’t distracted for long by consensus predictions of at least seven years of gloom. Even then I was convinced the investment successes of Warren Buffett and Charlie Munger weren’t down to luck. I reckoned their secret lay somewhere deeply hidden away in bookshops.

Hard to believe, I know, but to source and then buy books you had to commit serious time to get off yer bum, travel great distances and visit real shops. Not like today when a few clicks on t’internet leads you unerringly to the ideal purchase, which arrives neatly packaged the very next day from that highly successful Brazilian river.

My other book selection process involved travelling much further afield, given that I often used to have the “pleasure” of awaking at the sparrow’s fart and catching the “red eye” to London in search of friendly financial journalists and new customers. And even then as now, you did a lot of hanging around airport lounges which afforded me extra browsing time to discover intriguing books.

And that is how I stumbled across “The Age of Unreason” by Charles Handy and available in ‘91 in paperback for only £7.99. A bargain! In it he foresaw dramatic changes transforming business and predicted “the virtual disappearance of lifelong, full-time jobs”.

As an example, he explained that when he left Uni he had obtained a role in a Plc within a specialist division and posted to a foreign subsidiary. Then to illustrate the pace of change, by 1989 not only had the role gone, the division too, as had the Plc, and even the country had vanished. Gulp!

He suggested that “increasing discontinuous change” required “upside-down thinking”. He compared the future to the frog sitting in a pan of water slowly brought to the boil. Because frogs can’t detect gradual temperature changes they’ll blissfully stay put until it’s too late. 27 years later look at what Amazon and Apple have done to businesses that didn’t react to change.

So I decided to apply “upside-down thinking” to the current consensus that the world’s stumbling into another recession, visit an old pal, and simultaneously indulge myself in another passion of mine– red wine. And where better to do all this than in Upsidedownland, Australia. 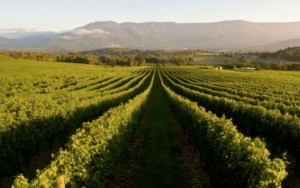 So what did I discover? Apart from some new glorious red wines and Tim Marshall’s “Prisoners of Geography” (in a bookshop) you will be relieved to learn that after travelling many thousands of miles in upsidedownland there’s nothing to report to give economic pessimists fresh hopes.

In short, the world down-under is buzzing. New 5-star hotels are springing up in Perth, Aussie wine sales are breaking records (and that was before I got there) and as to Melbourne …take my advice. Don’t go near there on after 5pm, unless you fancy being trapped by thousands of Aussies looking for a drink. Think Australian Rules footie but without the rules.

What really grabbed me about Australia is the legacy left to the current generation by hard-working early 19th Century settlers who cleared the land, created vineyards and built cities.

Then there’s the trees. Summer sun in Oz is fearsome. So what did they do? They planted trees by the thousand to provide shade. Not for themselves or their children, but for their grandchildren and great grandchildren. That was their legacy. It’s humbling walking in the welcome shade in the streets of Melbourne.

So what did I learn? The Chinese said the best time to plant a tree was 25 years ago. The Aussies started even earlier. And if you want to create shade for your retirement years, Charlie Munger has released his checklist . Three stand outs…. Be Independent in thought, Be Prepared to work hard and read and read. And Have Patience, so resist the human bias to act.

Last words on legacy. HMRC raised over £5 billion in Inheritance Tax last year. If you want to provide your family with some welcome shade against this tax, maybe plant some tax effective saplings now?

Why it pays to stay calm amid market fear and greed

On The Money: ALAN STEEL says the sentiment swingometer points towards team performance, rather than individual players

What to do when the numbers don’t add up