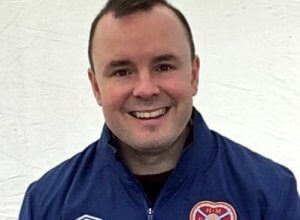 A familiar voice across the Edinburgh, Lothians and Fife areas for a number of years, Martin has decided to hang up his headphones to pursue a fresh career with the club he has supported as a boy.

He has taken up a role as commercial and marketing executive, despite having no experience in either field.

Admitting the club, currently sitting in sixth place in the Scottish Premiership, has taken a gamble with his appointment, Martin said: “I’m really excited to be joining the Hearts commercial department and working matchdays with the incredible team.

“They’ve taken a chance on me and I can’t wait to repay the faith they’re showing in me!”

The father-of-one was most recently a community fundraiser with Alzheimer Scotland after leaving his prime time afternoon slot with Forth, while he has also anchored the station’s Saturday afternoon football results programme.

He is no stranger to Hearts fans having hosted Christmas parties in the Gorgie Suite, commentated for the partially sighted at Tynecastle and been match announcer on occasion in recent years.