Taste of the Caribbean

First white rum may be next craft sector Cocktail bar owners Jason Scott and Mike Aikman have teamed up with food and drink veteran Gavin Ferguson to bring another taste of the Caribbean to Scotland.

SeaWolf – the first white rum to be distilled on Scottish soil – is being distilled in Angus by Ogilvy Spirits.

It has been created by Mr Aikman and Mr Scott, the pair behind cocktail bar Bramble, and Vino Wines’ co-founder, Mr Ferguson.

They have formed Boilermaker Drinks Co and hope rum will become the next craft drinks sector.

Mr Aikman said: “Rum is a massive player in the cocktail world. However, when we started looking around for a British brand, we realised that no other white rum is distilled in Scotland and so SeaWolf was born.

“We feel that Scottish rum is about to have its time in the spotlight and we aim to be at the forefront.”

Taking its name from the Native American term for killer whales, the name makes a subtle nod to both Scotland’s naval links with rum importation but also the pods of sea wolves that are found dotted around the Scottish coastline.

It has taken 18 months to develop and only 300 bottles are being made available before the end of the year.

Mr Aikman added: “SeaWolf is Boilermaker Drinks Co’s first project but we have aspirations to produce a stable of Scottish spirit products and eventually produce in our own distillery.” 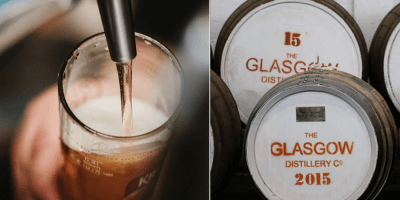