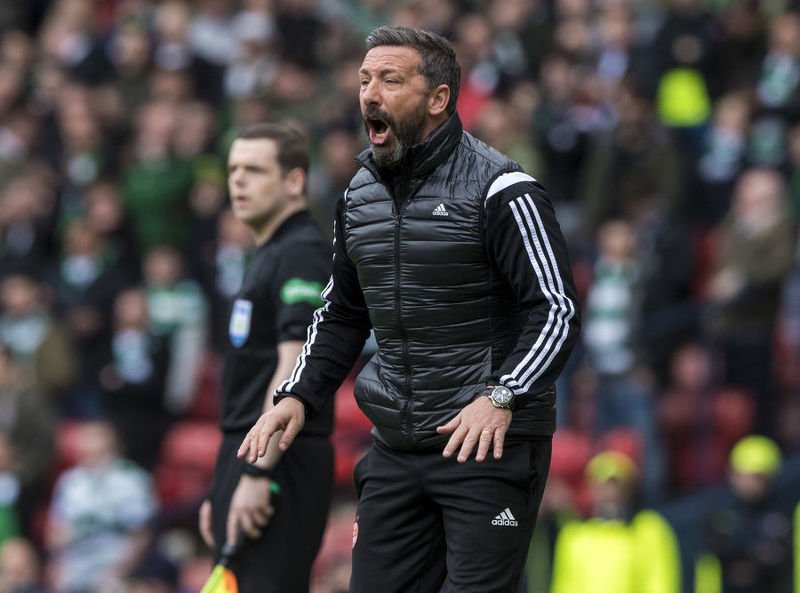 Aberdeen manager Derek McInnes says he is waiting to see if the Scottish FA punish Celtic for their fans’ sectarian singing during his side’s 3-0 semi-final defeat.

The former Rangers midfielder was sent off by Craig Thomson in the second half for gesturing to the supporters who had been aiming the chants at him at Hampden Park.

Assistant Tony Docherty had already been dismissed at half-time after comments made to Thomson in the tunnel, while an indisciplined display from the Dons also saw Dom Ball and Lewis Ferguson red carded as they were swept aside by the treble-chasing Hoops.

“I shouldn’t react and I was wrong to do so,” said McInnes. “I should be better than that. I’ll take my punishment.

“I’ve heard that song a hundred times aimed at me and I’ve never reacted to it so the frustration maybe from the game has played a part in that. The referee or the fourth official deemed my reaction a red card offence. If it is, it is, and I’ll take my punishment for that.

“It will be interesting to see if everybody gets punished for the incident. I don’t want to say any more – it’s up to everyone else to say their bit. It’ll be in the delegate’s report, which is refreshing as it’s not always in their report, when they hear sectarian singing. It certainly wasn’t in the last cup final.

“But that’s not my fight. It’s for others to condemn. For my part, I take responsibility for my own actions – I didn’t react the first time, I did the second time. If my reaction is deemed a red card offence, I’ll take my punishment.”

James Forrest opened the scoring on the stroke of half-time, nine minutes after Ball’s dismissal. Odsonne Edouard then converted a 61st-minute penalty before Ferguson’s red card for a lunge at Tom Rogic six minutes later, the Australian completing the scoring shortly afterwards.

The win keeps Celtic on course for an historic three trebles in a row, although interim boss Neil Lennon remains unsure if that achievement will land him the job permanently.

“If the club perceives the best way forward is to go somewhere else, then who am I to argue with that? That’s for other people to decide,” he said.

“There was a lot of pressure because of the significance of the game today. If we’d lost, the treble treble was gone and the great cup record was gone. So it was really important to negotiate that.

“I’ve had no guarantees, no reassurances, no promises. I’m here to do a job and I’m taking it game by game.” 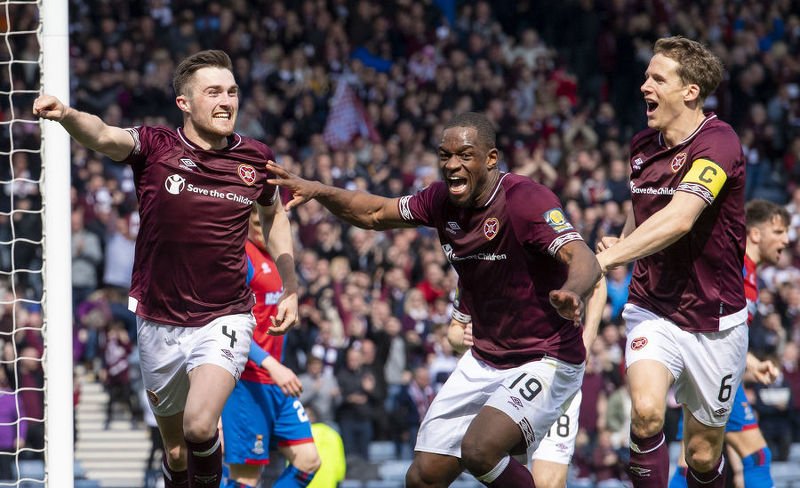 Celtic will take on Hearts in the final on May 25 after the Jambos defeated Inverness Caledonian Thistle in the first semi-final.

“All I want is the best for the club,” said manager Craig Levein, who is still searching for the first major trophy of his career.

“I’ve poured four-and-a-half years of my life, in this last period, in trying to build the club back up to where I think we can get to. Obviously there are moments I feel proud of. And this – the cup final – will be another one.”