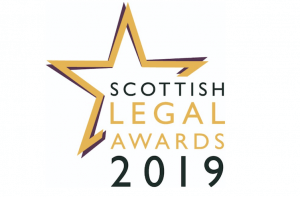 The finalists in the national competition which celebrates excellence in Scottish law have been announced following a record high volume of entries and number of competing firms.

A total of 47 individuals and teams from 52 Scottish firms and organisations have been selected by the judging panel following assessment of the highest number of entries in the competition’s 16-year history.

Included in the awards announcements are three new in-house categories which were introduced in this year’s refreshed line-up to recognise the rising number of in-house practitioners in both the commercial and public sectors.

Two special awards which are not open for entry but decided at the discretion of the panel, will also be presented and these are a Lifetime Achievement Award and Managing Partner of the Year.

Shonaig Macpherson, chairman of the judging panel, said: “Reviewing this year’s record high submissions was very encouraging as these awards continue to diversify to recognise the wide body of law practice in Scotland.

“Finalists should feel very proud that not only have they performed at the top of their game in the last year, but they impressed the judges with their thoughtful and very detailed submissions.  Congratulations to everyone and we look forward to celebrating the many achievements in Scottish law.”

The winners will be announced at the annual black-tie awards ceremony which takes place on Thursday 21st March 2019 and will be held at the Hilton Hotel, William Street, Glasgow.