US stocks rebounded from sharp losses in the previous session as earnings season got off to a strong start and fears eased around hedge funds selling long positions to cover shorts.

“Stocks have largely recouped earlier losses as the fear that previously ran through the markets has dissipated,” said CMC Markets analyst David Madden.

Drinks company Diageo rallied 3.15% after it increased its interim dividend as it reported first-half operating profit down 8.3% to £2.2bn.

10am: Market hit by airlines figures

Jet engine maker Rolls-Royce topped the fallers’ board in the early exchanges in London.

On the up was the Guinness and Johnnie Walker drinks giant Diageo, which added 3.8% after its latest trading update (see below).

Valneva said production of its COVID-19 vaccine has begun at its manufacturing site in Livingston.

EasyJet said it expects to fly no more than about 10% of its Q2 2019 capacity for the second quarter of the current financial year.

Johnnie Walker to Guinness drinks group Diageo said underlying net sales – excluding currency fluctuations – grew 1%, as strong demand at retail stores in the US made up for weak business at bars and restaurants in Europe.

Run by First Bus in a project led by Aberdeen City Council, the buses emit only water and will save one kilogram of CO2 with each kilometre travelled.

The £8.3million project has been funded by Aberdeen City Council, the Scottish Government, and the European Union (FCH JU), with an investment of about £500,000 per vehicle.

The UK’s first hydrogen production and bus refuelling station was opened in Aberdeen in 2015 as part of a £19m green transport demonstration project.

The new Apple iPhone helped push handset revenue to a new record. Group revenue for the quarter ended 26 December rose by 21% to $111.44 billion.

The Federal Reserve left its key overnight interest rate near zero and made no change to its monthly bond purchases.

European countries are again restricting travel across their borders with Belgium banning non-essential travel from today, France and Italy demanding negative tests from all EU visitors and Germany looking at ways to cut air traffic to “almost zero”.

EU travel restrictions have gone beyond sealing off the UK and are now curtailing free movement across the continent.

UK hauliers are allowed more rapid screening to cross into and out of France.

The FTSE 100 closed firmly in the red

Retailers slipped 0.3% after reporting the biggest annual drop in prices since May.

Defence contractor Babcock was off 1.52% after a downgrade to ‘underweight’ from ‘overweight’ at Barclays, which said a capital raise was likely. 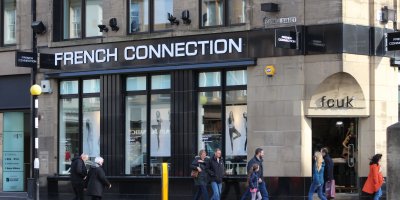