Scottish Engineering members have reported a “remarkable” turnaround from the downbeat results of December 2019 with a 22% swing in confidence, matched by an outlook on orders up 42% in the coming three months.

Chief executive Paul Sheerin said: “These are very welcome signs of recovery indeed, and whilst Brexit has a long way to go before being anywhere near “done”, its encouraging to see that the world in the meantime continues to turn, and many manufacturers feel the welcome pressure of a return to busier schedules.

“An unwelcome point of clarity on Brexit this week was the UK Government’s confirmed plan to overhaul the immigration system, ending the EU freedom of movement from 31 December 2020.

“This is disturbing news for our sector where the salary caps remain above ordinary operator level and many companies are already struggling to recruit semi-skilled staff.

“Given Scotland’s forecast population shrinkage, a more flexible immigration system which reflects the needs of our labour market is still required.”

The Business Barometer from Bank of Scotland Commercial Banking also recorded rising business confidence in Scotland, up 19 points during February to 15%.

Scottish companies reported higher confidence in their business prospects, which rose 16 points to 14%, and higher economic optimism, which rose 20 points to 15%. Together, this gives an overall confidence of 15%.

This was reflected in businesses’ hiring intentions, with a net balance of 5% of businesses in Scotland expecting to hire more staff during the next year, up eight points on last month.

Across Scotland, fewer firms felt Brexit would be damaging. A net balance of 8% of businesses said that they felt the UK’s exit from the European Union was having a negative impact on their expectations for business activity, compared to 19% a month ago.

Across the UK, overall confidence was unchanged on last month at 23% as firms’ optimism in the economy and confidence in their own prospects held steady. 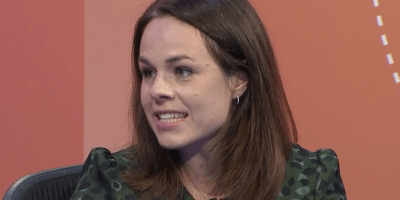 Scotland’s economic output in November was above pre-pandemic levels, according to the chief statistician. GDPRead More

Sturgeon says impact of Covid measures were ‘worth it’