Call to help save jobs 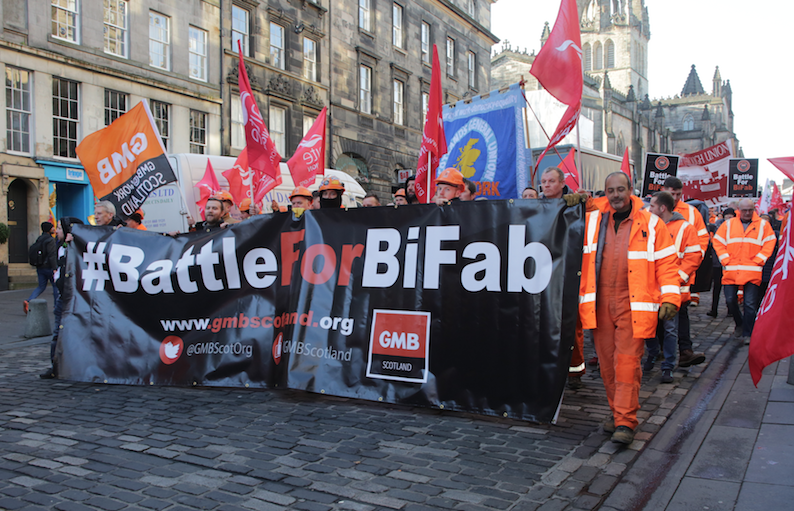 Ms Laird says a decision on whether to send a manufacturing order for giant turbine jackets to Indonesia is due soon, and that BiFab should get at least a slice of the work for the Neart na Gaoithe (NnG) development which is being built just 10 miles away.

A letter outlining her concerns has been despatched to the First Minister ahead of Friday’s Ready for Renewal rally at the Scottish Parliament, stressing that having the jackets shipped half way around the world is inconsistent with the government’s green credentials.

Ms Laird, said: “Scotland has a real opportunity to be a world leader in renewables and at the forefront of a Green Industrial Revolution if the political will is there to make it happen.

“Investment is required in the yards to make them competitive enough to win contracts in an increasingly competitive global market.

“Unfortunately without financial commitments from the Scottish Government, who have a minority stake in the yard to make necessary improvements, the campaign is unlikely to be successful.

“That is why, ahead of Friday’s rally, I have written to Nicola Sturgeon asking her to invest in the BiFab yards and make it absolutely clear that Scotland is ready to lead the world in the manufacturing of renewable energy technologies.”

I am writing to you today in my roles as Shadow Secretary of State for Scotland and MP for Kirkcaldy and Cowdenbeath with regards to securing work at the BiFab yards in Methill.

As you will be aware, as of April 2018, the Scottish Government has a minority shareholding in the new company after helping to broker a deal with DF Barnes which was intended to ensure that new opportunities for manufacturing work and fabrications would come to the yards.

However, over a year later, the yard remains closed and the workers are still waiting to find out whether any work will be forthcoming.  In the past few months we have seen manufacturing work for the Kincardine Offshore Floating Windfarm be awarded to Spanish state-owned shipbuilders Nevantia and contracts for turbine jackets at the Moray East Offshore Windfarm awarded to UAE fabricators Lamprell and Belgian steel constructors Smulders.

In the latest blow to the workers and to the organisation, it now looks as though turbine jackets for the Neart na Gaoithe (NnG) project are set to be manufactured in Indonesia before being transported halfway around the world to Fife. That site is less than 10 miles from the BiFab yards, and it would seem to me, in light of our climate targets, to be very counterproductive if the yards in Fife are not awarded at least part of that contract.

Of course, I fully appreciate and accept that the role of promoting these yards as international competitors does not lie squarely at the door of the Scottish Government and I have written to the relevant UK Government ministers encouraging them to do everything they can to ensure that BiFab can operate on a level playing field.

I met EDF in London on 12 June 2019 regarding the rumours around the NnG project and it was clear that while this is a commercial decision for EDF, government intervention is required to bring the yards up to a competitive standard.  These yards are strategic assets not just for Fife but for Scotland and the UK and given its minority shareholding, the Scottish Government should seize the opportunity, invest in these yards to ensure that there is a level playing field when bidding for these and other contracts.

Strategically this is the easiest decision that you will ever make.  If the work for the NnG project is forthcoming, it could bring up to £540 million into the local Fife economy.  That would vastly outweigh any financial investment to bring the yards up to speed, and would ensure that Scottish economy, including the supply chain benefits from this development.

I am optimistic that the Scottish Government will indeed seize the moment, take the necessary steps, and invest in the infrastructure and upgrades required at BiFab.  However, it has been over 18 months since it became clear that BiFab was struggling and it has been over a year since your government intervened.

It has also become increasingly clear that while foreign operators continue to be subsidised by their governments, BiFab will be unable to compete. However I strongly believe that with investment in the yards BiFab will undoubtedly be able to compete for these contracts and stand a very good chance of being successful in the bidding process. That being said, I do fear that if that investment is not forthcoming BiFab could be left trapped in a vicious cycle with Scotland losing out on these quality, high-end green jobs of the future. Given our tradition and worldwide reputation in the field of engineering this would be shameful.

This is a pivotal moment.  It is essential that BiFab win not just work, but sufficient work for them to demonstrate that they are back in the renewable’s ‘game’, so that they can attract further investment and build their reputation in this highly competitive market.

Given the importance of this vital issue to the communities I serve I would of course be happy to meet with you in person to discuss this at the earliest opportunity.