SerAndy doubles partnership gets off to winning start 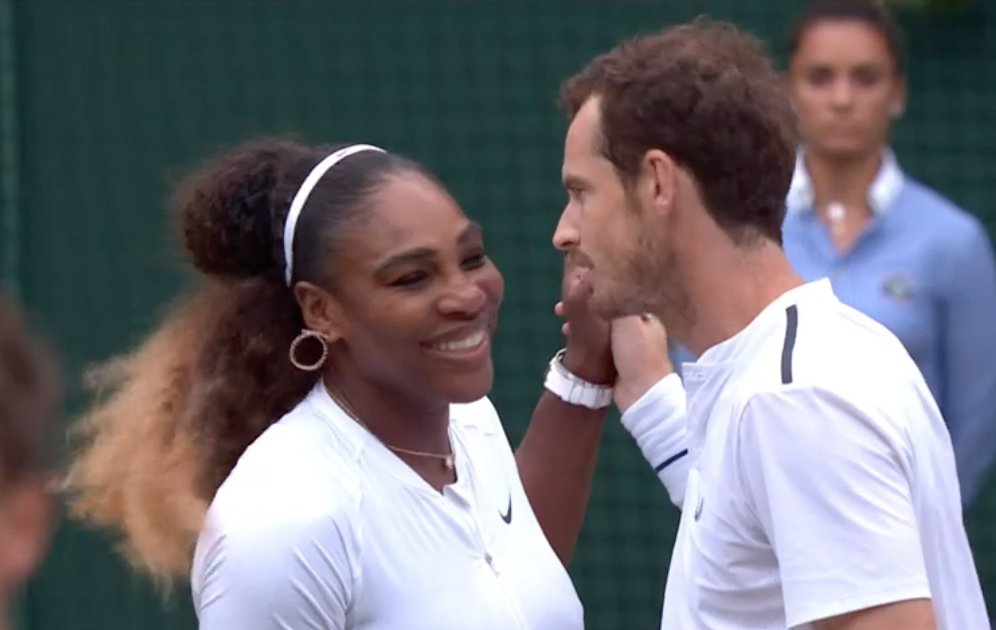 All smiles: Williams and Murray embrace after their first round victory

Andy Murray’s partnership with 23-times Grand Slam winner Serena Williams got off to a flying start on the perfect stage for two of the game’s biggest stars.

A buzz of excitement swept around the venue when it was confirmed that the rare pairing – dubbed SerAndy – would take place on centre court.

They swept aside the unseeded German Andreas Mies and the Chilean Alexa Guarachi 6-4, 6-1 in 1 hour 16 minutes and will meet 14th seeds Fabrice Martin and Raquel Atawo in the second round.

Despite the convincing scoreline, there were moments of anxiety for the winners who had never before played together. Williams in particular was caught occasionally out of position.

Even so, the odd slip in tactics and a moment that saw Williams lose her feet at the net, did not detract from a satisfying performance played with charm and good humour. It was watched by Murray’s wife Kim and mother Judy alongside Williams’ partner, Alexis Ohanian the co-founder of Reddit. Confirming that this was no ordinary doubles match, Judy was seen filming their victory embrace on her phone.

There was a sense of relief for Murray who earlier in the day crashed out of the men’s doubles alongside Pierre-Hugues Herbert with defeat in the second round to Croatian sixth seeds Nikola Mektic and Franko Skugor.

The Scot, 32, would also have been relieved to emerge from the two matches without any pain following his recent hip surgery.

The three-times Grand Slam winning Murray was happy with their performance.  “After losing earlier in the men’s doubles, all the energy is the focused now on the mix,” he said. “We played well, returned well and served well – it is a great start.”

Williams, 37, added: “I think it worked out well, We had never played together, so it is always a learning curve. We wanted to start fast and we take it very seriously.”

Murray added: “The thing that’s impressive, after the amount of success that someone like Serena has had for such a long period, is to still be out there at eight o’clock at night, having already won a singles, and just wanting to win and being competitive.”

Johanna Konta is the only Briton left in the singles as she came back from a set down to defeat the American Sloane Stephens to reach the last 16. The 2017 semi-finalist won 3-6 6-4 6-1.

Dan Evans suffered the heartbreak of losing a five-set thriller under the new roof on Court No.1. Portugal’s Joao Sousa won 4-6 6-4 7-5 4-6 6-4 in the third round to become his country’s first player to reach the last 16 at Wimbledon.