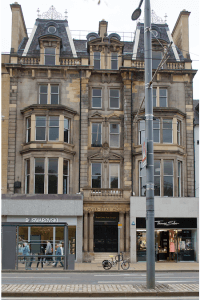 Luxury hotel group Red Carnation has acquired a property on Edinburgh’s premier shopping street for its first hotel in Scotland.

The company said it aimed to “transform” the former Royal Over-Seas League private club at 100 Princes Street with a multi-million pound makeover. It will return to its original purpose having been opened in 1879 as the Windsor Hotel.

Red Carnation added that the renovation work would create a “highly exclusive retreat” and would open next year, becoming the group’s 19th property worldwide.

Red Carnation’s portfolio includes Hotel 41, which overlooks the Royal Mews at Buckingham Palace, and Ireland’s Ashford Castle, which was once home to the Guinness family. Managing director Jonathan Raggett said: “It has been a dream of ours to open a hotel in Edinburgh for some time, and with the best address in the city, it was well worth the wait.”