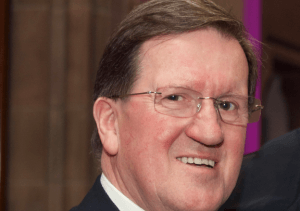 Former Secretary General of NATO and senior Labour minister Lord Robertson of Port Ellen, has been unveiled as chairman of Western Ferries (Clyde).

He replaces Alistair Ross who stood down after 21 years on the board, including 16 years at the helm of the ferry company, which operates the commercial vehicle and passenger service between Gourock and Dunoon.

George Robertson was elected MP for Hamilton at a by-election in 1978, George Robertson held several key roles in Opposition including Shadow Scottish Secretary from 1993 to 1997.

After Labour won the General Election in 1997 he became Defence Secretary in Tony Blair’s government. Two years later he moved to Brussels to become the 10th Secretary General of NATO, serving until 2004. He became a life peer in 1999 as Lord Robertson of Port Ellen in Islay, his birth place where his father had served as a policeman.

Lord Robertson, who joined the board of Western Ferries in 2006, said: “Having attended Dunoon Grammar School and spent my formative years in the town, I am well aware that the whole area has benefited from a reliable, dawn-to-dusk, roll-on roll-off ferry service.

“Thirteen years ago, I agreed to serve on the board of Western Ferries as part of my long-standing commitment to the town and this vital link across the Firth of Clyde. That commitment to the principle of regular and frequent ferry links in Scotland is now reinforced as I become chair of the board of this successful company.”

Lord Robertson also paid tribute to Mr Ross. He said: “Alastair has been a brilliant and dynamic leader who used his wide knowledge of the industry to build one of the best ferry services in the UK. I look forward to building on his very impressive legacy.”

Welcoming Lord Robertson to his new role, Gordon Ross, managing director of Western Ferries, said: “It is a huge coup for Western Ferries to attract someone of the calibre of Lord Robertson, first of all to the Board and now as Chairman. As one of the outstanding politicians and leaders of his generation, he will be a huge asset to the company.

“In the last few years, under the chairmanship of Alistair Ross, Western Ferries has invested £30 million into four new ferries and new berthing structures and linkspans on either side of the Firth of Clyde. This will help us maintain the exceptional levels of service, 99.9% reliability, that our customers have come to expect. We look forward to further investment and growth under Lord Robertson.”

Mr Ross, said: “I am deeply proud to have been associated with Western Ferries for such a long time. The company’s recent investments in vessels and piers now means that Western Ferries provides the most frequent and most reliable ferry service in the country.

“As I leave, I am extremely grateful for all the efforts of the shore and vessel staff who have worked so hard in delivering these improvements as well as the service we provide to the local communities. I am also delighted that Western Ferries has continued to employ locally and to have over 90% of the staff based in Dunoon and Cowal. This is testament to the company’s commitment to the communities it serves.”

David Harris, who was a non-executive director with Western Ferries for 21 years, has also stood down from the board.