JPI Media ‘in talks’ to sell The Scotsman and other titles 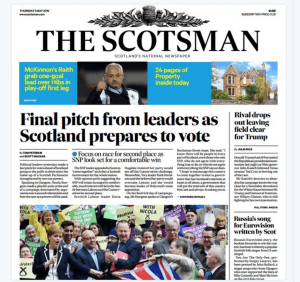 JPI Media, formerly Johnston Press, has confirmed recent industry speculation that it is in talks to sell its newspapers, including The Scotsman.

The company’s US-based bondholders appointed advisers in May to look at options. David King, CEO of JPI Media, the company formed after acquiring JP from administrators, wrote to staff at the time saying there was no “formal sales process”.

However, the company is now said to have set a deadline for preliminary bids to arrive by next Monday. Belgian newspaper publishing and broadcast media company Mediahuis, which acquired Irish publisher Independent News and Media in April, is thought to be interested. The Daily Mail & General Trust has also expressed interest in the ‘i’ newspaper which JP bought in 2016.

In a statement today, the company said: “We believe that our industry is undergoing substantial change and we are not immune from the changing trends in news consumption and rise of digital news alongside the decline in print advertising and circulation.

“Consolidation within the regional media industry is necessary, which is why we are actively exploring a number of options open to us.

“The board of directors has recently appointed a financial adviser to better assess the current and future prospects for the business and its titles.”

The publisher was bought out of administration by its creditors late last year. They include Goldentree Asset Management, Benefit Street Partners, CarVal and Fidelity. The deal was engineered to reduce JP’s £220 million debt and interest charges which prevented the group from investing in the titles. The debt fell to £85m and the pension scheme was controversially transferred to the Pension Protection Fund, while shareholders were wiped out.


JPI Media, which owns 200 titles including the Yorkshire Post, Sheffield Star and Falkirk Herald, received a £35m injection of new funding. At the time it said the deal would safeguard its newspapers and the jobs of all staff.

Early last month Daily Business reported that The Scotsman titles, which include Scotland on Sunday and the Evening News, would be vacating one of two floors of its Edinburgh offices and introducing a paywall as it battled with declining sales of its print titles.

At the end of the month, journalists criticised “constant cost-cutting” by JPI Media as more staff leave amid concerns that they were struggling to get the papers out.

JPI Media last month announced the closure of ten more local papers, including the Selkirk Weekend Advertiser and the free title Glasgow South and Eastwood Extra. It also shut The Buteman which was produced from Edinburgh.