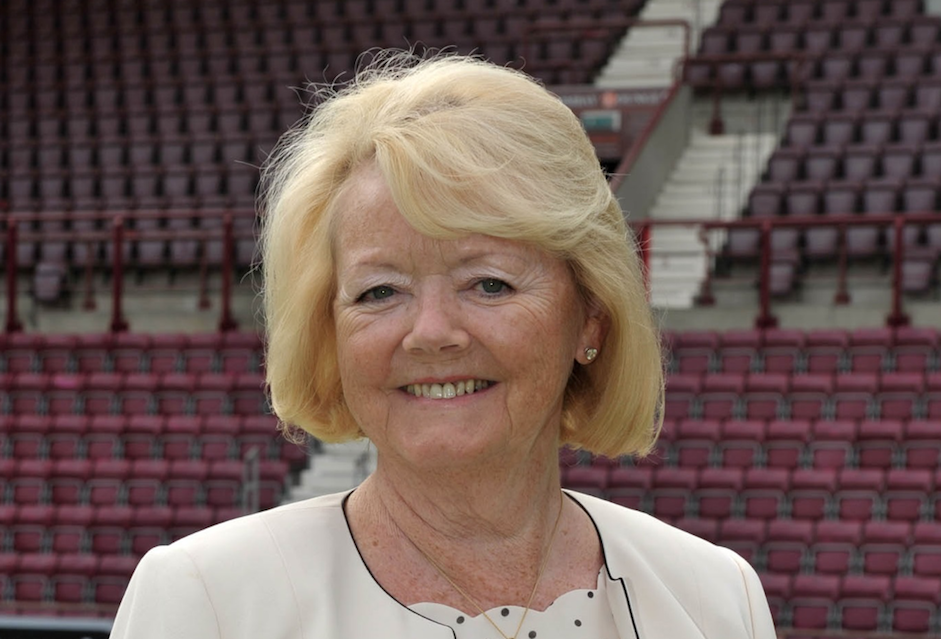 Ann Budge, owner and chairman of Heart of Midlothian Football Club, has been chosen to receive the esteemed Edinburgh Award.

In recognition of her business success and community work, and for services to sport in Edinburgh, Mrs Budge will be presented with an engraved Loving Cup from the Lord Provost later this year.

She will become the 13th person to receive the Edinburgh Award, following in the footsteps of last year’s recipient Doddie Weir (2018) and fellow entrepreneur Sir Tom Farmer (2016).

The West Pilton-born entrepreneur was the first woman appointed to the senior management grade in brewing company Scottish & Newcastle, before co-founding Newell & Budge, a bespoke software and IT company, headquartered in Edinburgh.

Amongst many academic and business recognition awards, Mrs Budge was listed as a role model by the Women’s Engineering Society and inducted into the Entrepreneurial Exchange Hall of Fame in November 2013.

She bought Hearts FC out of administration in 2014 and within five years successfully transformed Tynecastle into a family and community friendly stadium, doubling revenue and building a solid and sustainable future for the business.

Lord Provost Frank Ross, said: “Not only has Ann Budge saved one of Edinburgh’s main football clubs, giving it a chance to return to the Premiership, but she has drastically transformed Tynecastle into a place where the Gorgie and wider Edinburgh community can unite, learn and spend time together.

“Under her lead, Hearts became the first professional football club in the UK to introduce the living wage and working with Edinburgh institution Baillie Gifford she has introduced The Heart of Midlothian Innovation Centre. This works in partnership with learning providers, schools and local businesses motivates young people of all ages to acquire vital skills for Scotland’s burgeoning digital economy.

“Ann Budge is an inspiring business woman, entrepreneur, philanthropist and community champion. She is a role model for girls everywhere and for putting fans first in football. No matter what colour scarf you wear, I think we can all agree that the Edinburgh Award is the ideal way for our city to recognise all that she has achieved.”

Mrs Budge said: “It’s a real honour to be chosen for the Edinburgh Award and I owe a huge debt of gratitude to those who nominated me. What makes this award so special is that it’s from my city, my hometown, and presented on behalf of the citizens of Edinburgh.

“As someone from a working class family from West Pilton, who still cherishes everything about this city, the fans and the incredible people and the charities we work with, to be told I’ll soon have my handprints set in stone in the heart of Edinburgh – that’s a special moment indeed for me and my family.”

First launched in 2007, the Edinburgh Award is a way for Edinburgh citizens to pay a lasting tribute to individuals who have made an outstanding contribution to the city through their achievements.

Owner, CEO and chairwoman of Heart of Midlothian Football Club.

Co-founded IT services company Newell & Budge in 1985, going on to buy out her partner in 2001. She sold Newell & Budge to French company Sopra Group in 2005 at which point the business she had started had over 1,000 staff across six regional offices in the UK and New Delhi. Stood down as CEO of the UK operation at the end of 2008.

Since then has held a number of non-executive roles and has been active in the angel investment community.

She was approached by the Foundation of Hearts early in 2011 to assist with its plans to develop a supporter ownership model for Hearts football club and ultimately concluded the successful purchase of the club in May 2014. Next year, the majority shareholding will be transferred to supporters in a model that is regarded as an exemplar of fan ownership.

She led the redevelopment of the stadium, doubling revenue and building a solid and sustainable business for the future.

Honorary doctorate from Robert Gordon’s University, from Napier University and from Heriot Watt University. Induction into both the Entrepreneurial Exchange Hall of Fame as well as the Strathclyde Academy of Distinguished Entrepreneurs. One of eight recipients of the Woman of Outstanding Achievement Award by the UK Resource Centre Listed as a role model by the Women’s Engineering Society Person of the Year (Edinburgh Evening News)