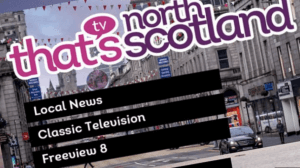 Local television operator That’s TV is to close its Dundee studio as it scales back its national network from 20 to 13 amid a financial squeeze. The company operates 20 of Britain’s 34 local TV stations.

Preston, Grimsby and Norwich are also closing but the company said reporters will be retained in all 20 areas and insisted viewers would not notice a difference. Media regulator Ofcom accepted the financial difficulties the sector faces and agreed to the move.

The network was launched in 2013 by Jeremy Hunt during his time as Culture Secretary, combining local news with teleshopping. The cutbacks mean will see That’s TV operate seven regional studios, which will each broadcast the news for up to six local stations.

That’s TV chief executive Daniel Cass said: “The best use of journalists in terms of their skills and news gathering ability is out on location gathering news, not stuck in a studio.”

Mr Cass added: “It’s not a secret that it’s challenging to operate a standalone local TV channel, with studios and premises and technical staff in one location.”

That’s TV wants to “deliver a model which delivers great community-based news reporting in the future”, and it makes sense to make “efficient use of the fact we operate a group that controls 20 licences”, he said.