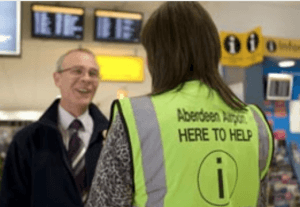 Striking airport workers are to be consulted on a new offer from management to end a damaging pay dispute.

Following talks with Aberdeen Airport’s managing committee the Unite union will ballot its members, but warned that two days of action will go ahead as planned.

The latest offer on pay remains at 3% with a new one off payment of £600 for full time employees but the bonus plan has now been removed. Next year, Aberdeen Airport has proposed an annual pay offer identical to the Retail Price Index figure in January 2020.

Unite will now consult its membership in the coming days on the offer but the two days of planned action are still scheduled to take place on 27 and 28 June both commencing at 6am until 10am.

Shauna Wright, Unite regional industrial officer, said: “The reality is that the latest approach by Aberdeen Airport does not significantly take us forward in any way. It is a two-year pay offer, which could critically result in a real terms pay cut based on the inflation figure in January 2020.

“Critically, AGS Limited has repeated their position not to reopen the pension scheme consultation. However, Unite is a member-led organisation and we will put this offer to our membership in a consultative ballot and ask them to decide whether this constitutes a great improvement.”