Trump pulls back on NHS being part of trade talks 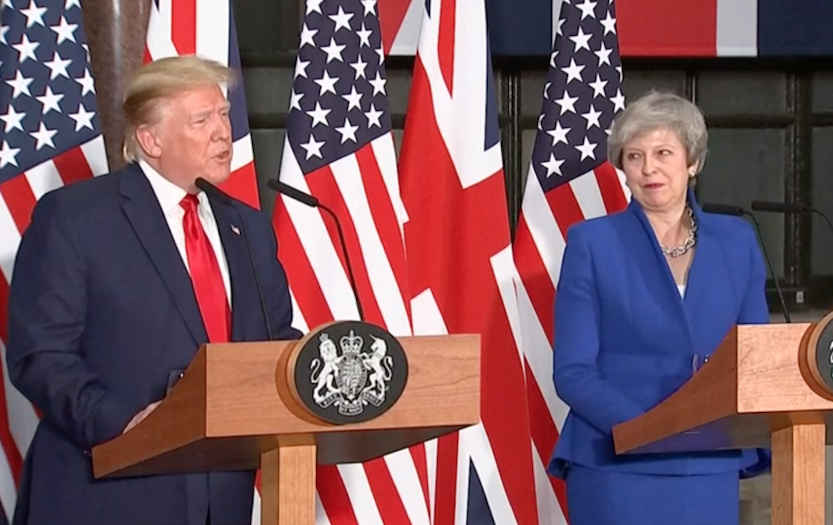 Donald Trump and Theresa May at a media conference

US President Donald Trump today promised to work with Britain on a new trade deal but created a new furore after indicating that the NHS would be part of the negotiations.

After meeting Prime Minister Theresa May, who steps down as Tory leader on Friday, he responded to questions about access to NHS contracts for US companies, he said “everything will be on the table”.

But Mrs May tempered his expectations by saying any trade agreement would follow talks about “what should or should not be in that trade deal for the future”.

Mr Trump later appeared to back-track on his comments and suggest the NHS will not be part of any talks. In an interview with ITV, he said: “Somebody asked me a question today, and I say, ‘Everything’s up for negotiation’, because everything is, but I don’t see that being – that’s something that I would not consider part of trade. That’s not trade.”

At a media briefing he predicted that Brexit “will happen” and said the US was committed to a “phenomenal” trade deal with Britain.

Labour leader Jeremy Corbyn tweeted: “They all need to understand: our NHS is not for sale.” Mr Trump earlier revealed that despite Mr Corbyn boycotting last night’s banquet, he had requested a meeting with the US president but had been turned down because he is a “negative force”.

SNP Westminster Leader Ian Blackford said that Scotland’s health service faces “unprecedented danger”. Mr Blackford spoke to a crowd of thousands at a demonstration in Parliament Square outlining the SNP’s opposition to a “damaging” trade deal that includes the NHS, and the Trump administration’s treatment of Muslims, LGBT+ people, migrants and other minorities.

“The message from Scotland is crystal clear – our NHS is not and must never be ‘on the table’ in a trade negotiations with Donald Trump or anyone else,” he said.

Boris Johnson and Nigel Farage could meet Mr Trump privately this evening, before a gathering at the US Ambassador’s residence at Winfield House. Mr Trump told the media that Boris Johnson would “a great job” as Prime Minister.

Mrs May and the President had discussed a number of issues including the inclusion of Chinese telecoms giant Huawei in the UK’s telecoms network. Mr Trump predicted the US and UK would reach agreement over how to deal with Huawei, saying Britain and the US would work out any differences and continue to share intelligence.

On the wider issue of a trade deal, Mr Trump said: “As the UK makes preparations to exit the EU the US is committed to a phenomenal trade deal between the US and the UK.

“There is tremendous potential in that trade deal, I say probably two and even three times what we’re doing right now.”

Mr Trump told a news conference he hadn’t seen any protests, saying: “I heard that there were protests. I did see a small protest today when I came, very small. So a lot of it is fake news.”

There were thousands of protestors in London and Police said more than 3,000 officers had been deployed.

The President praised the Prime Minister for having done a “fantastic job”, but there were claims she had been “snubbed” after the schedule for Mr Trump’s three-day state visit failed to include any time for a one-to-one meeting between the two leaders.