Scotsman cuts offices by half and considers paywall 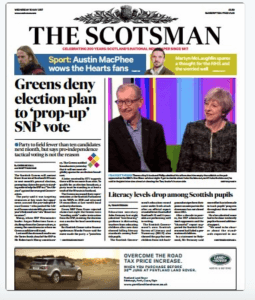 The owner of The Scotsman, Evening News and Scotland on Sunday is closing half the floorspace at the newspapers’ head office in Edinburgh in the latest move to cut costs.

Daily Business has learned that JPIMedia, the US-based consortium of hedge funds that now controls the titles, wants to ensure it has the “right space requirements for current and future needs”. The two floors it has occupied at Orchard Brae in the west end since 2014 will be reduced to one.

It confirmed it is looking at more subscription-based models for its 200 titles across the UK and this is believed to include introducing an online paywall as it assesses how to recoup revenue lost in falling sales of the print editions. The company is also investing in another re-design of the Edinburgh titles’ website.

In response to an enquiry from Daily Business, a JPIMedia spokesman said: “Like most publishers across the UK and beyond, JPIMedia is continually assessing opportunities for new income streams to reduce our exposure to falling advertising revenues.

“We have recently launched a number of subscription models, and are currently focused on understanding the propensity for users to subscribe. The results will help define what our subscription strategy should be across the rest of the business.

“We are investing in our digital platforms across the JPIMedia portfolio including new apps and websites. The new Scotsman app launched in May [and] is available in itunes, Google and Amazon app stores. The new website is being worked on and will be available later in 2019.”

This latest development follows a call for a further 10 redundancies and continuing speculation that the hedge fund owners who acquired the collapsed Johnston Press out of administration last November are looking to break up the business.

There has been talk of selling the ‘i’ newspaper, acquired in 2016, and offloading the other titles to another buyer.

JPIMedia emerged from the acquisition with a much reduced debt and a pot of cash to invest in the business.

However, the battle to stem the decline in print revenue is ongoing and the latest moves indicate a growing confidence in focusing on the online operations with a lower cost base.