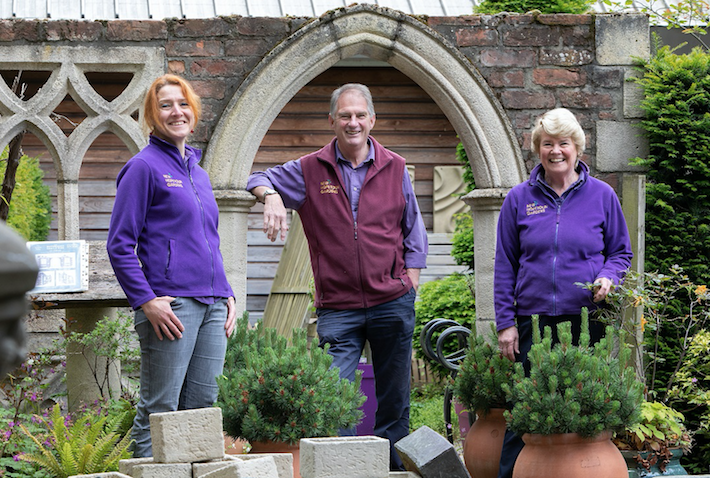 Beechgrove Garden presenter Lesley Watson and her husband Dougal Philip have handed ownership of their New Hopetoun Gardens to their employees.

The couple, who regularly judge the show gardens at the Royal Horticultural Society’s shows at Chelsea and Hampton Gardens, have always been keen to protect the future of their business set within Hopetoun Woods between South Queensferry and Linlithgow.

A controlling interest of the company’s stakeholding has been transferred to an employee ownership trust. Dougal and Lesley will continue to be involved, supporting the team of 37 staff.  Their fellow director and co-owner Morag Macrae has worked closely with the couple.

An employee ownership trust enables staff to own a company without having to raise their own funds. Ownership Associates guided the directors through the transfer of the business’s shareholding and legal services were provided by Anderson Strathern whilst French Duncan provided accountancy services.

Mr Philip established the business in 1978, setting up the garden centre in the Walled Garden at Hopetoun House and it moved to its current purpose-built facility, New Hopetoun Gardens, after 20 years.

The team at New Hopetoun Gardens – affectionately known by customers as ‘The Plant People’ – look after 18 individually themed gardens as well as the Orangery tearoom.

Mr Philip said:  “We’re delighted to have had the opportunity of handing over ultimate control of our business to our wonderful and valued team.  We’re extremely grateful to them for their dedication and hard work over the years – they’ve been instrumental in the great success of New Hopetoun Gardens and the loyal customer following we’ve built up.

“They have shared our vision for the business 100% so it’s fitting that they will now be able to build on that and reap the benefits going forward.  We wish them continued success for the future and have every confidence in them and we’re delighted that they are happy for us to continue giving them our input for several years.”

Sarah Deas, director at Co-operative Development Scotland, said:  “It’s great to hear that another well-established family business has made the move to employee ownership, which is fast becoming a popular business succession model. It has proved to be highly successful for companies across a wide range of industry sectors which have made the transition.

“New Hopetoun Gardens has a superb reputation and becoming employee-owned means that the future of the business is secured for its talented team of staff who are now in a position to shape its future and benefit directly from its success.”