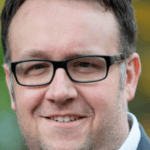 After four years at Indigo PR, Colin McFarlane is moving next month to Pagoda as director and head of public affairs.

He previously worked as a senior policy, research and communications officer in the House of Commons and before that he was head of the parliamentary office at Holyrood.