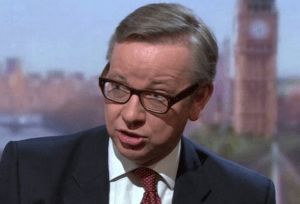 Tory party leadership candidate Michael Gove has revealed he would take advantage of Britain’s departure from the EU to scrap VAT to boost the economy.

In a hastily-announced policy plan that appeared to be aimed at driving his admission about drug-taking off the front pages, he has suggested a move to help small companies in a post-Brexit Britain.

In a Sunday newspaper he said his plan was to increase investment, productivity and wages across the country, with a special focus on helping those areas and regions where productivity is lower.

“It would mean reducing the regulations which hold business back, cutting and reforming taxes – such as business rates – which put pressure on small businesses and undermine our high streets, using the opportunity of life outside the EU to look to replace VAT with a lower, simpler, sales tax.”

However, Mr Gove has continued to face questions about drug-taking. He admitted yesterday he was “fortunate” to avoid prison after using cocaine several times 20 years ago after confessing last week that he took the class A drug while working as a journalist.

Asked if he should have gone to prison, Mr Gove said in an interview: “I was fortunate in that I didn’t, but I do think it was a profound mistake.”

His comments were made as Home Secretary Sajid Javid, another of the 11 Tory MPs who have said they want to replace Theresa May, was backed by Scottish Conservative leader Ruth Davidson.

The Scottish Conservative leader said Mr Javid’s life experience and knowledge made him the best candidate for the job and to be the next PM.

Writing in the Scottish Mail on Sunday, she said he embodied the party’s values of “aspiration, education, opportunity, hard work and just reward”.

She also backed him “in the secure knowledge he will defend Scotland’s interests and is an instinctive and committed Unionist”.

Boris Johnson, the leadership favourite, has pledged to cut income tax bills for people earning more than £50,000 a year.

The former foreign secretary told the Telegraph he would use money currently set aside for a no-deal Brexit to raise the 40% tax rate threshold to £80,000, a move that would put further pressure on the Scottish Government to avoid creating a bigger tax gap with the rest of the UK.