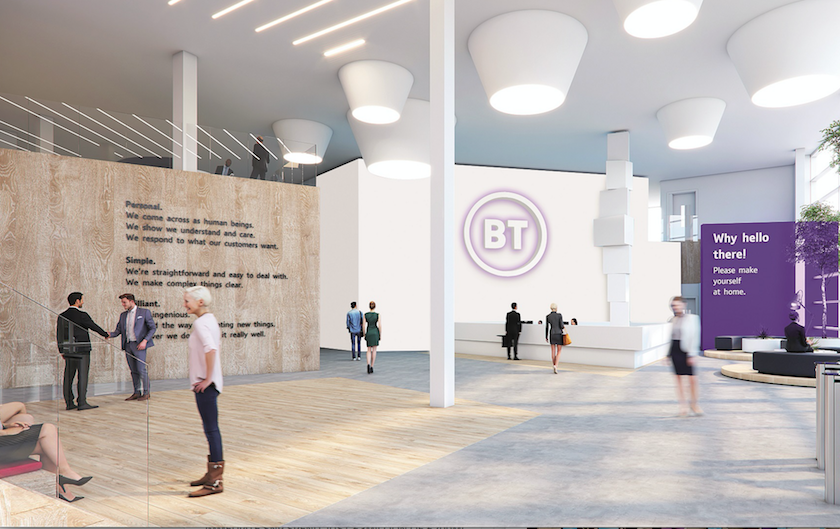 Office of the future: BT has revealed its new look

BT is to close 270 of its 300 offices with Edinburgh becoming one of eight ‘workplaces of the future’ in a radical overhaul of its property portfolio.

‘The Better Workplace Programme’ will consolidate BT Group’s operations into modern, ‘future-fit’ buildings, including corporate offices, contact centres and specialist sites. It is the largest programme of its type in the UK. BT’s telephone exchanges will be retained by the group.

The other centres are Belfast, Birmingham, Bristol, Cardiff, Ipswich, London and Manchester in what the company describes as a clear signal that BT is committed to the whole of the UK, with locations in all four countries and their capitals. Though detailed plans of BT’s footprint in each location are still to be finalised, some existing BT buildings will be refurbished while others will see BT move into new offices.

BT Group is responsible for generating £1 in every £110 produced in Scotland, according to an independent report. It also generated £1.2 billion to the Scotland’s economy in “Gross Value Added” GVA, during the 2017/18 financial year.* The company employs more than 7,700 staff in Scotland. The company later confirmed that it may have more than one office in Edinburgh which may be a new site or a refurbishment of its existing site. The announcement will have no impact on staff numbers.

New group chief executive Philip Jansen said: “The Better Workplace Programme is about bringing our people together in brilliant spaces, and transforming the way we work.

“Revealing these eight locations is just the first step; we have dedicated teams working on identifying the best buildings to move into and which ones to redesign for the future. As a result of this programme, BT people will be housed in inspiring offices that are better for our business and better for our customers.”

As announced in May 2018, the shake-up aims to tackle problems ranging from criticism of BT’s fibre broadband to an underperforming IT services business.

BT Group will also exit its St Paul’s headquarters in London and is currently identifying a new home for the business in the capital.

Daily Business has asked how many office locations in Scotland will be closed and is awaiting a reply.

Independent network provider Commsworld has underpinned its planned growth into England by opening its first office in London.

The Edinburgh-based company manages and controls Britain’s largest privately operated core fibre network and will now provide transit bandwidth from its new base. It will hire an account manager to direct activity from London.

The move follows the firm’s most successful year, with revenues breaking through £20 million – a 41% increase on the previous year, along with a threefold growth in profits.

Ricky Nicol, chief executive, said: “Having a base in London is fantastic for us and a major step forward in our bid to cement ourselves as a truly UK-wide organisation.

“It means we can meet with our valued customers and partners more easily and efficiently, without the early morning flights or having to schedule many meetings into one day.

“It’s an incredibly exciting time for our business and this move represents the next step on our journey.”