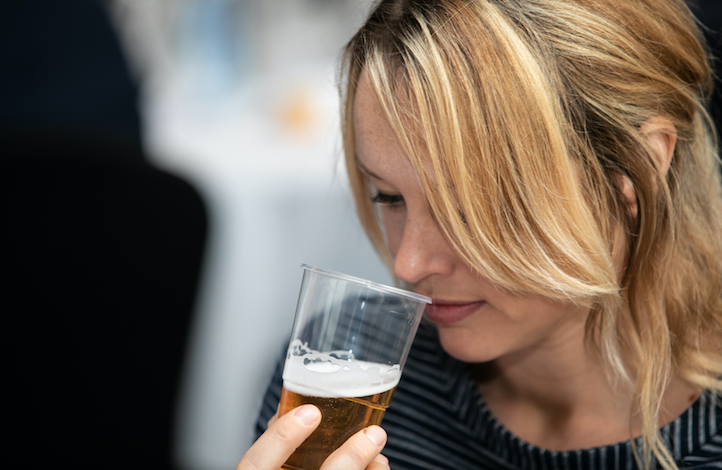 Christie Clinton, buying director of Aldi, samples one of the beers

The finalists in the fourth annual Scottish Beer Awards have been announced with 37 breweries and 200  beers brewed in Scotland progressing to the finals of the national competition.

The awards programme is the largest independent assessment of the Scottish brewing sector ever created and the results provide an important indicator into the quality of Scottish beer and the financial performance of Scotland’s booming brewing businesses.

In total 297 beers were tasted blind by 28 judges which include many of the UK’s foremost brewing and beer experts.  Samples were marked in a carefully designed process which allocates points across a range of quality standards.

After a record high volume of entries this year, only 60% of the products entered were marked high enough to progress to the finals.

Chairman of the judging panel, Hilary Jones commented: “We’ve welcomed a fantastic range of beers into this year’s competition. After a very rigorous blind tasting session, the beers that our most professional judging panel scored most highly, clearly showcase the best of Scottish brewing.  The quality of Scottish beer just gets better and better! On behalf of the entire judging panel, who had no idea what products they were tasting on the day, I congratulate the many breweries who have taken part in the year’s competition and who are announced as finalists today.”

The tasting competition is also supported by 58 written submissions from brewing businesses which have been judged in day of business judging in areas including business performance, export, marketing and product development.   5 breweries have been selected in the hotly contended Breakthrough Brewery of the Year category and these are 71 Brewing of Dundee, Campervan and Overtone of Edinburgh and Merchant City Brewing of Glasgow.

Since inception, the Scottish Beer Awards has been sponsored by ALDI who this year celebrate their 25th year in Scotland and who recently collected the coveted ‘Scottish Sourcing Award’ at the 2019 Scotland Food and Drink Excellence Awards.

Graham Nicolson, group buying director for Aldi Scotland, commented: “We are thrilled to continue our support as headline sponsors of the Scottish Beer Awards for the fourth year running.  Scotland’s breweries continue to produce more and more high-quality beer and we’re very proud at Aldi to be involved in supporting the growth of the brewing sector in Scotland.  We wish all the finalists the very best of luck in this year’s competition and look forward to celebrating the winners in September.”

All medal winners will be announced at an awards celebration and gourmet beer-paired dinner on Thursday 19 September at the Edinburgh Corn Exchange.

The awards programme created and designed by KD Media in 2015, has this year appointed two new nominated charities for 2019.  These are The BEN, the Benevolent Society of the Licensed Trade of Scotland and the My Name’5 Doddie Foundation, set up by rugby legend Doddie Weir to help improve the lives of those affected by Motor Neuron Disease.

Brewer of the Year sponsored by Close Brothers Brewery Rentals

The winner of this award will be announced at the dinner.

Product Development Team of the Year sponsored by Muntons

Born in the Borders Brewery

Not Your Buddy, Guy!; Stewart Brewing

Dark Side of the Moon; Campervan Brewery

NEIPA Here Nor There; 71 Brewing

Bring Out The Imp; Alechemy