Davidson: ‘we can build a low tax Scottish economy’ 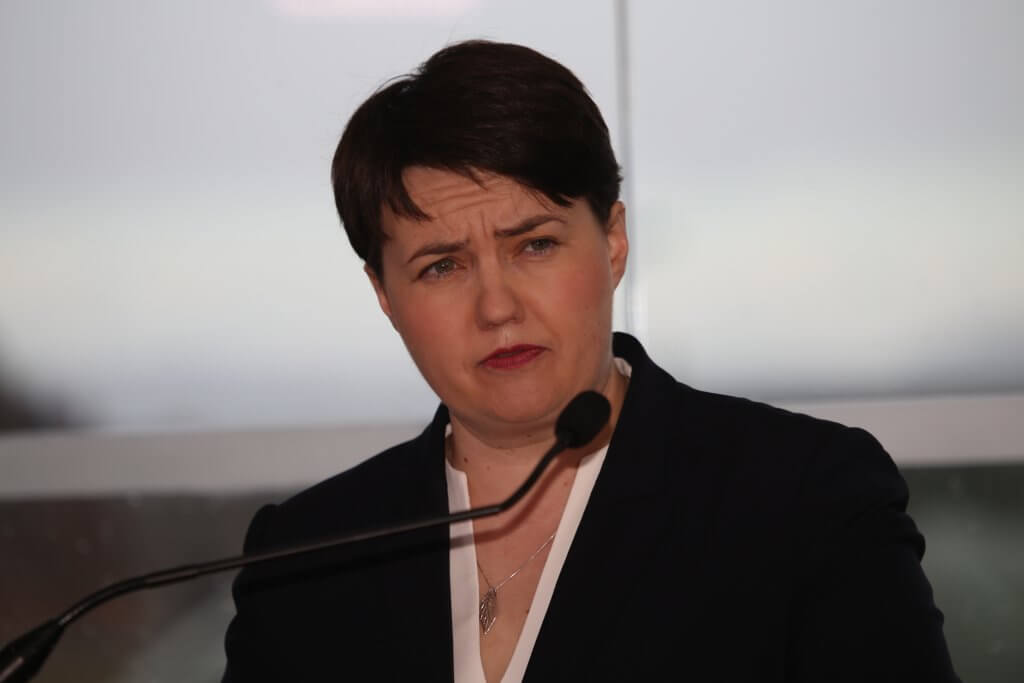 Ruth Davidson has set out a vision of a low tax economy and a belief that Britain can come through the current “malaise” a stronger country, more united and better off.

In a speech to a business audience in Edinburgh she said Scotland could benefit from a “post-referendum bounce” and she looked forward to building a “Tiger” economy based on technology, innovation and global exports. She said her party had set “an ambitious aim”, to restore Scotland’s economic growth to an annual 2%.

She criticised the SNP’s tax proposals, saying they risk driving away talent and investment from Scotland, at a time when the country needs to attract skilled workers and capital.

“I believe that Scotland after 2021 can enjoy a post-referendum bounce,” she said in an address focused clearly on the Scottish election in two years time.

“Wth the massive uncertainty of further constitutional division set to one side, business confidence and investment will return, enhancing the lives of all our citizens,” she added.

On the SNP’s tax plans, she said: “I agree with the SNP that we need to attract more people to come to Scotland – indeed, I think it will be vital to our future prosperity.

“I just struggle to understand why the SNP thinks that a markedly higher tax regime for Scotland is going to achieve the goal we all want – to ensure the brightest and best make their home here.

“So I would say to Ministers – please be very careful about further tax rises. It risks driving away investment and jobs. And it risks damaging the very objectives you have set yourself.

“I still feel genuinely positive about the future, and optimistic that we can come through our current malaise a stronger country, more united, and better off.

“It is, after all, worth remembering that unemployment is at its lowest level since before I was born. That employment across the UK is at the joint highest figure ever recorded. That wages are now rising consistently.

“Whisper it, friends, but it is not all bad out there.”

Ms Davidson said Edinburgh was a city that has the world at its feet, but was operating “with one arm tied behind its back.”

She said: “We have a council which, in my view, treats private development with the utmost suspicion, and which is not trusted by major investors. Blocking major projects – like the Hyatt hotel at Granton Marina – even when developers have done everything they can to make plans acceptable.

“And, taxing everything that moves and some things that don’t, without any promise of real improvements. Whether it’s a Tourist Tax, turning every and guest house into a tax collection point. Or a parking tax which could hit everyone from police officers to commuters. Or even a Garden Tax, lumping a £25 fee on everyone who wants their brown bin emptied.

“The truth is that Edinburgh is very definitely open for business, it’s just a shame the SNP-Labour administration in the City Chambers isn’t.

“And for Edinburgh, read Scotland as a whole.

“Whether it’s video games entrepreneurs in Dundee, the energy industry in Aberdeen, or  financial services right here – I see people looking outwards, looking globally, who see no block in their ambition to become world leaders in their field.”

Ms Davidson said she finds too many politicians fail to grasp the basics: “that if you don’t create wealth, you don’t get the money to pay for our vital public services. That if you’re going to create sustainable economic growth, you need a clear strategy that is designed to maximise our potential. That if we get a reputation in Scotland as a high tax nation, it will only damage our ability to attract talent and investment. I want to change that.”

“As a nation, we aren’t setting out a clear course. There’s no over-riding story about where we want to go. That is what we want to bring: clarity of purpose.”

She picked up on the message of Carolyn Fairbairn, director general of the CBI, who last week stressed the need to promote the country’s openness and desire to welcome investment.

“I fear that the message on tax we are sending out right now is far from positive. And that if the divergence between us and the rest of the UK continues to grow, then it will only deter people and capital from coming here.

“I believe that Scotland after 2021 can enjoy a post-referendum bounce. That with the massive uncertainty of further constitutional division set to one side, business confidence and investment will return, enhancing the lives of all our citizens.’