'Difficult to turn down' 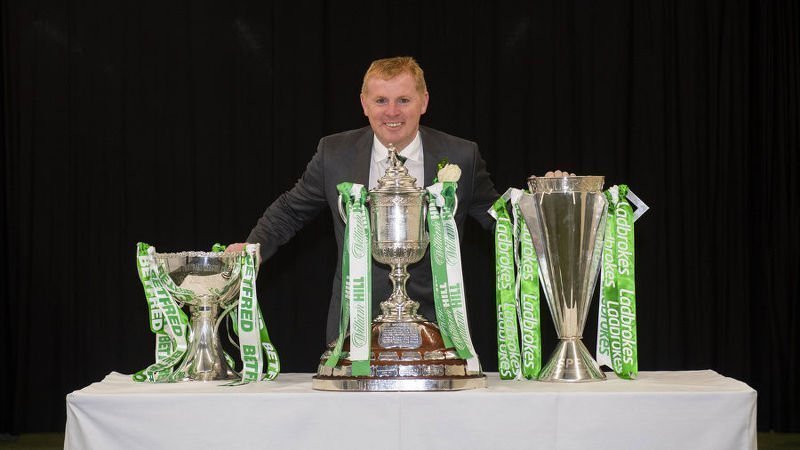 Neil Lennon has accepted the job as Celtic manager after guiding the Hoops to an historic third treble in a row.

The 47-year-old was appointed interim boss after Brendan Rodgers’ departure to Leicester City but after adding the Scottish Cup with victory over Hearts to the league title, chief executive Peter Lawwell moved quickly to offer him the post permanently.

It will be the Northern Irishman’s second spell in charge, having previously bossed the Bhoys from 2010-2014, and he said: “Peter and Mr Desmond and a few members of the board came in afterwards to the shower area. We had a five-minute chat and they said they wanted to offer me the job.

“I’m older, I had four years away, it was always an ambition to come back and manage Celtic again so I’m pleased this day has come.

“I know people may find this hard to believe but I’m a very good professional. I’m dedicated to my job. I had some lows at Bolton and then two great years at Hibs and I believed in my own ability. Thankfully, so did the Celtic board.”

Lawwell said: “Neil stepped up to the plate when we needed him. He’s a true Celtic man who knows the club and the city.

“He’s a winner with a fantastic eye for a player. I’m delighted to announce he’s been offered the job.”

Odsonne Edouard was the two-goal hero as Lennon’s side completed an unprecedented treble treble. The Hoops had to come from behind in the second half after Ryan Edwards’ 62nd-minute opener for the Jambos. A shock looked on the cards at that moment with Celtic performing below-par but there was to be no denying their moment of history.

Edouard slotted home a penalty in the 62nd minute to haul his side level and when he broke free eight minutes from time, he kept his composure to send his shot beyond Bobby Zlamal.

Skipper Scott Brown said: “It’s phenomenal. For the fans, it’s unbelievable and that was people saying we’ve had a poor season. We’ve done the treble yet again and it’s the third one in a row. It shows you the lads are relentlessness. They threw the kitchen sink at us and we held out. Hearts have given us a very hard, very physical game, but we stood up to it.”

The defeat was a disappointing end to a poor season for Hearts. Despite a promising start to the campaign, Craig Levein could only steer his side into sixth place in the Premiership and questions will now be asked whether he will be in charge next season or return to his director of football role.

St Mirren preserved their top-flight status in front of the first sell-out 8,000 crowd at the Simple Digital Arena after a penalty shootout in the play-off final in which United missed four spot kicks.

The hosts played the final five minutes of extra time with 10 men after the dismissal of Duckens Nazon, but needed only Paul McGinn and Mihai Popescu to score from the spot to retain their place in the Premier League.