Calls for easing of burdens 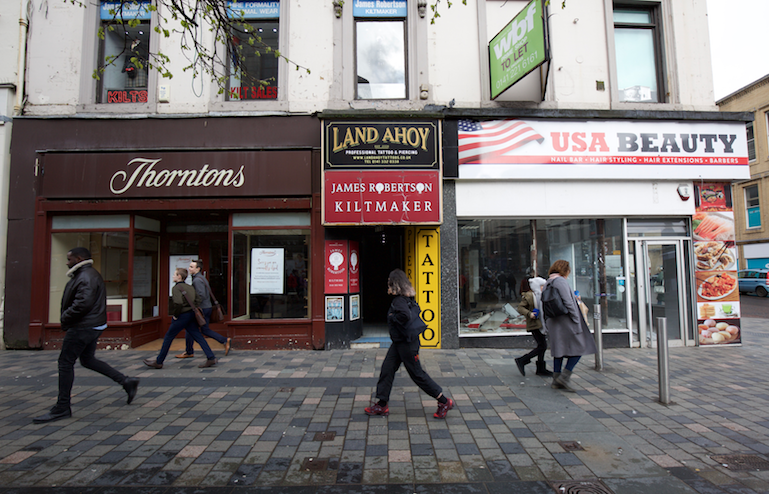 One in eight shops are now empty (pic: Terry Murden)

Companies today face a series of added costs that have contributed to it being dubbed “Blue Monday”, prompting calls for policymakers to ease off on further business burdens.

Business rates and the minimum wage are rising, while energy and council tax bills rise, pension contributions are up and the Making Tax Digital regulation comes into force.

The business rate poundage, or tax rate, in Scotland will rise from 48% to 49%, the highest rate since the start of the decade when it was 40.7%. The increase will add £13.2 million to retailers’ rates bills at a time when retail sales are sluggish and one in eight shops in our town centres is vacant.

Monday also sees the start of the fourth successive year when the Large Business Rates Supplement is higher in Scotland than it is in England. This affects 5,065 shops in Scotland, at an extra annual cost of £14.1 million.

David Lonsdale, director of the Scottish Retail Consortium, said: “The cumulative burden of tax and regulatory costs has mushroomed and is accelerating the pace of change within the industry, as retailers reinvent themselves in the face of profound changes in shopping habits.

“A medium term plan to lower the rates burden is urgently needed, coupled with restoration of the level playing field with England on the large firms’ supplement. This would increase retailers’ confidence about investing in new and refurbished shop premises.”

Although business rates have been cut in England, the British Retail Consortium (BRC) wants to see an end to what it calls “the business rates burden” in a submission made to the Treasury Select Committee today.

Shopworkers’ trade union Usdaw continues to campaign for at least £10 per hour and an end to insecure contracts, despite claims from retailers that wage growth has contributed to job losses.

HMRC today forces VAT-registered businesses to comply with the Making Tax Digital initiative, with the software required to meet MTD obligations set to cost small firms £564 each on average.

More than a million small employers are also grappling with a further increase in auto-enrolment pension contributions to 3% from Saturday, the start of the new tax year. The minimum total contribution to such schemes will rise to 8% of an employee’s qualifying earnings, up from 5% last year. Employers will be required to shoulder 3% of the contribution.

The Federation of Small Businesses’ national chairman Mike Cherry said: “This truly is blue Monday for small business owners, and it comes at a time when confidence is already in the doldrums.

“Given the burden that MTD has placed on small business owners, it’s vital that the Government makes good on its commitment to light-touch enforcement. The software required to comply with MTD alone is setting small firms back by hundreds of pounds – and that’s before you get to the time and resource needed to negotiate new software.

“Business rates is an unfair, regressive tax that hits small firms before they’ve made their first pound in turnover, let alone profit.”

Householders and consumers are also facing higher costs. Energy and council tax bills are rising, as is vehicle excise tax on cars. Mobile phone companies are increasing charges by about 2.5%.

Gas or electricity prices for more than half of British households who are on variable or default tariffs, rise typically by £117 a year.