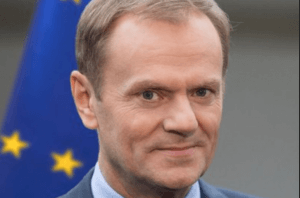 Britain could be offered a one-year extension to the Brexit talks under a proposal from Donald Tusk, president of the European Council.

His plan would allow the UK to leave sooner if Parliament ratifies a deal, but it would need to be agreed by EU leaders at a summit next week.

Mr Tusk’s proposal came as Theresa May wrote to the European Union to request a further delay to Brexit until 30 June. The UK is currently due to leave the EU on 12 April and, as yet, no withdrawal deal has been approved by MPs.

The prime minister has proposed that if UK MPs approve a deal in time, the UK should be able to leave before European Parliamentary elections on 23 May. But she said the UK would prepare to field candidates in those elections in case no agreement is reached.

The offer has emerged as talks continue between teams representing Mrs May and Jeremy Corbyn which are causing ructions in both Conservative and Labour parties.

Attorney General Geoffrey Cox has said that if they fail, the delay is “likely to be a long one”.

Downing Street said “technical” talks between Labour and the Conservatives on Thursday had been “productive” and would continue on Friday.

Brian Monteith: Corbyn dancing to May’s tune in this battle of political survival