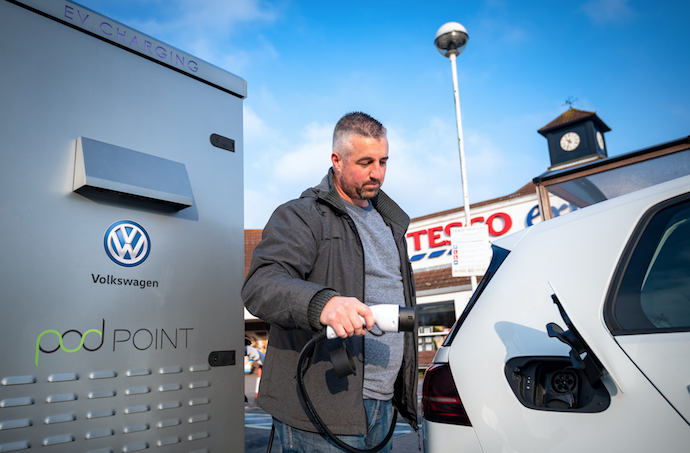 Tesco and Volkswagen are installing a network of charging points

Scottish energy specialists are looking into the best ways to re-charge electric vehicles at public venues and homes which do not have a private driveway.

SGS will look at two of the biggest challenges facing the roll-out of electric vehicles: how to charge cars at homes without their own driveways, such as flats, apartments and terraced streets; and how to charge vehicles at public locations, including shopping centres, events venues and tourist attractions, as well as filling stations and motorway services.

Likely solutions include tying the chargers to electricity storage batteries within homes, and linking them to flexible and low carbon technologies such as solar panels, wind turbines or utility-scale batteries connected to the wider grid.

Tesco and Volkswagen have already announced the UK’s largest retail electric vehicle charging network involving the installation of almost 2,500 charging bays at 600 Tesco stores over the next three years.

SGS’s software will be used to manage the charging of the vast increase in electric vehicles, which are expected to be the dominant form of transport by 2050, if not well before.

The project will test EV technology and procedures in Liverpool, North Wales and parts of Cheshire and Shropshire that could then be rolled out across Great Britain.

The UK Government’s plan to phase out conventional petrol and diesel vehicles by 2040 is accelerating the search for solutions that will allow the grid to meet the extra demand for charging cars, vans and lorries.

Graham Ault, founder and executive director at Smarter Grid Solutions, said: “Electric vehicles will revolutionise not just vehicle transport but Great Britain’s electricity grid. Project Charge is a significant step forward in making sure that the electricity networks will cope with the extra demand.”

Laura Kane, SGS project lead, said: “The days of petrol and diesel vehicles as the norm are coming to an end and this project will help to make sure network operators effectively identify where there is available capacity on the network for developers to create EV charge hubs.”