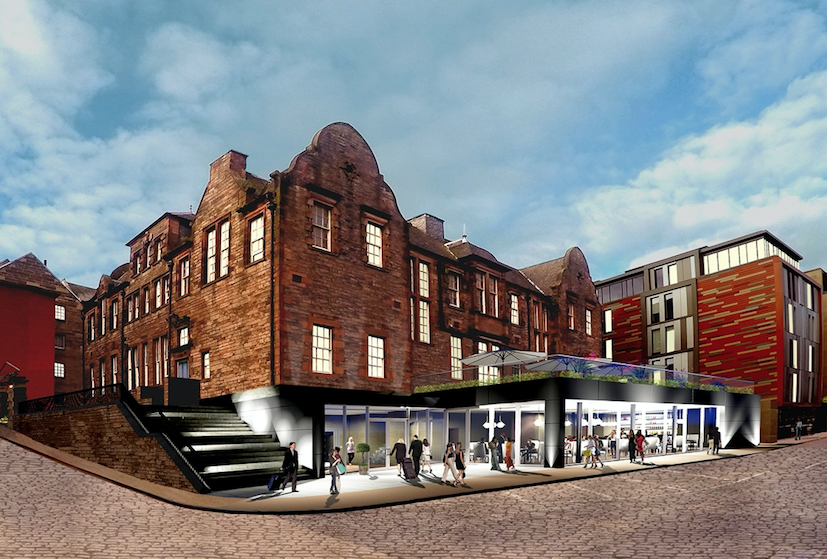 A converted Victorian school which was due to open two years ago as an aparthotel has been put on the market with an £8 million price tag.

The C-listed building in the New Waverley development behind the Royal Mile in Edinburgh has been transformed into a 21-apartment boutique hotel.

Now known as the Canongate, it was scheduled to become part of Billy Cowe’s Apple Apartments, opening in 2017. Apple runs luxury serviced apartments in George Street, Edinburgh. Staran architects were signed up for the Canongate scheme.

A spokesman for the project said: “Circumstances with Apple Apartments have changed so this opportunity is now being brought to the wider market.”

Knight Frank is now marketing the building at the junction of Market Street on behalf of developer Edinburgh Castle Ltd.

Contractor Redpath has carried out a full re-fit and the hotel is expected to be complete and ready to hand over to a new owner in June.

Neil Scott, partner at Knight Frank Edinburgh, said: “New Waverley has provided a significant boost to the city centre in Edinburgh – it has revitalised a once largely empty part of the city. The Canongate is an attractive opportunity for a hotel operator or investor to be part of what is fast-becoming one of the most successful regeneration schemes in the city, and even perhaps Scotland.


“Edinburgh is an increasingly popular destination for tourists and business travellers alike and, despite several new hotel developments in the city, occupancy rates remain high – last year they were around 83% in 2018. Projections for the development are robust.”

The 7.5-acre mixed-use New Waverley is transforming the area with 160,000 sq. ft. of Grade A office space, a range of leisure and retail opportunities and 148 residential apartments and penthouses. Recent tenants signed up to the development include HM Revenue and Customs, the boutique distiller Edinburgh Gin, and family-run café and bakery Loudon’s.

Jim Cummings, director at Edinburgh Castle, said: “Final renovation work at the schoolhouse site should coincide with completion of the office development phase at New Waverley.

“We’ve seen an increase in footfall as the regeneration takes shape, and with the new government office bringing 2,900 civil service jobs to the area, we can expect this to continue. The area is fast becoming an established district in the capital, creating an exciting community for visitors as well as those who live and work in Edinburgh’s historic city centre.”

Edinburgh Castle is forecasting operating rooms revenue at £1.4m per annum, representing a potential yield of 12.2% after operation costs.