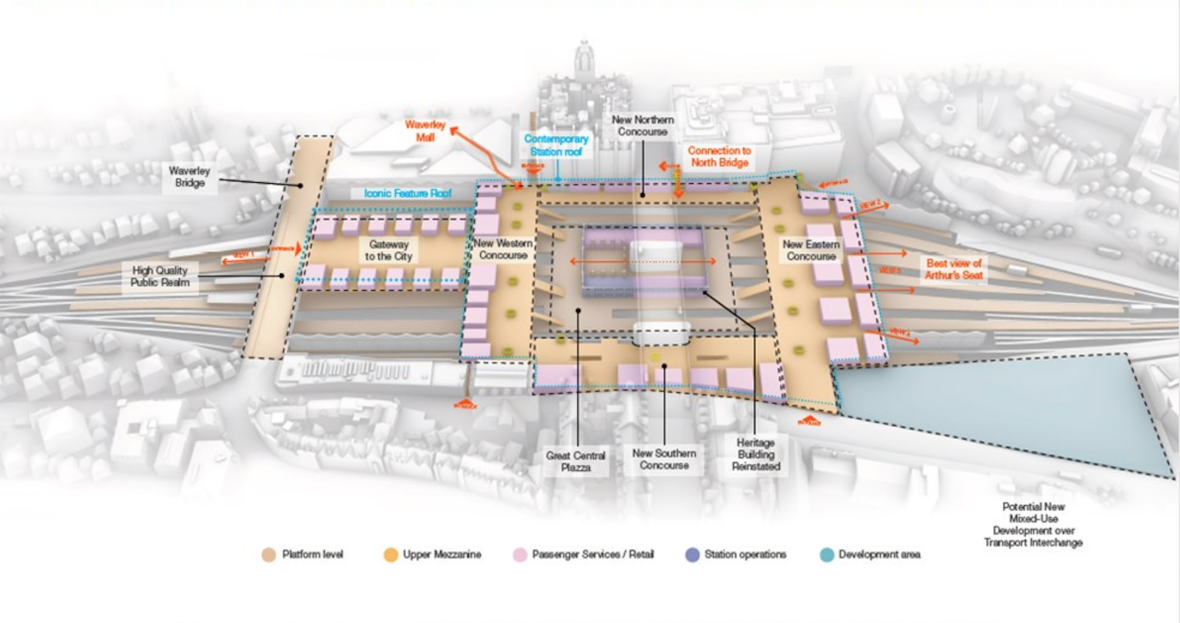 Waverley station in Edinburgh is expected undergo a radical overhaul to enable it to cope with a doubling in passenger use over the next 30 years.

Forecasters expect 49million travellers a year to pass through the station by 2048, prompting a widespread consultation on how it should be configured to avoid congestion and improve facilities.

A partnership involving Network Rail and City of Edinburgh Council will consider the impact of city centre developments and urban planning trends.

A team of engineers, architects and urban planners, led by Edinburgh based consultants Arup, have analysed the usage patterns of the existing station and have proposed various ideas, such as improving accessibility from the Old Town, Waverley Bridge and Princes Street whilst also seeking to deliver a modern, vibrant station for passengers, Edinburgh and Scotland.

Early work has now been completed and views are being sought from the public on a preferred strategy. This public engagement phase of the masterplan will run from until Friday 26 April. A public exhibition will be located on Waverley Station concourse for the duration, with the exception of 1 and 2 April when it will be on display in Haymarket. A survey can be completed online where more information is also available.

Following the completion of the public exhibition, feedback will be considered and incorporated into further development work that will ultimately result in a published Masterplan in September 2019. The plan will present a vision for the future of the station and will be used to explore future development via phased investment over the next 30 years.

Alex Hynes, managing director of the ScotRail Alliance, which includes Network Rail Scotland, said: “Waverley has seen its footfall more than double from 10 million to over 24 million within the last ten years and the latest estimates suggest that it will more than double again, to 49 million, by 2048. Such a steep increase is a positive indicator of the railway’s economic influence on the city and Scotland but also a clear sign that further investment will be required. 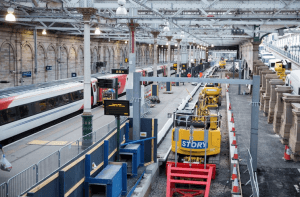 “We are creating additional rail provision within Waverley at present and will continue to seek new ways to create the best railway that Scotland has ever had. However, more trains mean more people and that inevitably adds to the pressure on station infrastructure and the surrounding streets.

“The work of the masterplan team to date suggests that some ambitious improvements to the layout of the station will be required to enable Waverley to meet the future needs of the station, the city and the country. Before a completed Waverley Masterplan is published, we are keen to listen to the views of our customers and stakeholders. With passenger numbers continuing to grow, ‘doing nothing’ is not an option.”

Lesley Macinnes, convener of the Transport and Environment Committee, City of Edinburgh Council, said: “Waverley Station is pivotal to our city’s public transport offering, so it’s essential that we provide a modern, accessible facility to welcome the millions of passengers passing through each year, encouraging trips by train and enabling seamless onward journeys in Edinburgh.

“With a rapidly increasing population and ever more visitors coming to the Capital, it’s necessary that we rethink the way we approach transport. In the face of such pressures we need to facilitate rail travel as a reliable and efficient choice for commuters – as well as residents and visitors. Our own plans for City Centre Transformation aim to create an inclusive, people-friendly environment, with active travel at its core, and the Waverley Masterplan will be a key element to this ambition too.

“It’s essential that we continue to work with partners, stakeholders and the public to realise this vision, so I would encourage as many people as possible to have their say on initial proposals.”

Michael Matheson, Secretary for Transport, Infrastructure and Connectivity said: “Edinburgh Waverley is the gateway to Scotland’s capital and beyond with a real historical significance within the city’s heritage. As rail grows in popularity, it is only fitting the station is enhanced in the years and decades to come thus enabling it to accommodate forecast passenger demand for cross-border, regional and commuter services.

“It is vital that we do not lose sight of Waverley’s distinctive character. By engaging, listening, developing and testing concepts we will be better able to deliver a future-proofed station that focuses on the passenger experience within its distinctive world-class setting. That is why I encourage Edinburgh residents, rail commuters and visitors to make their views known and engage positively in shaping the future for Waverley.”

Linkedin
Network Rail, Waverley Station Transport No Comments » Print this News
Shell turns green in major push on renewables market Previous News
Next News Why it is crucial for women to be more ‘visible’