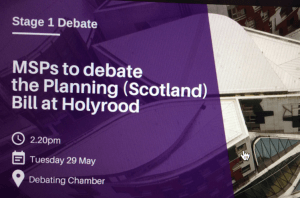 Town planners have warned MSPs about the ‘eye watering’ cost implications of the new planning bill.

The possible total cost associated with the provisions now included in the Bill – set out in a Financial Memorandum – has risen to more than £1 billion, according to the Royal Town Planning Institute (RTPI) Scotland.

The figures were described as ‘eye-watering’ by RTPI Scotland, who said that they could lead to a planning service that is unable to function properly.

Craig McLaren, the RTPI’s director of Scotland and Ireland, said: “The new duties and responsibilities included in the current Bill will have a massive financial impact on planning authorities, developers and communities. None of them have funded attached to them and their imposition could cause the planning service to grind to a halt entirely.

“There is surely a need now for MSPs to look again at whether the 91 new duties and responsibilities introduced during the scrutiny of the Bill are an essential part of it or whether they could be introduced through new and existing policy provisions or secondary legislation and regulations.”

The RTPI point out that these huge added costs come at a time of severe cuts for Scottish planning services which have seen a 25% decrease in planning staff and a 40% cut in budgets since 2009.

Fiona Campbell, chief executive of the Association of Self-Caterers, added her organisation’s concerns.

“Following the publication of this financial memorandum, we at the ASSC must stress that our sector has significant concerns about some amendments to the Planning Bill,” she said.

“There are some amendments to this bill that would have huge financial implications on struggling local authorities, particularly in how they relate to the £723m short-term rental sector, not to mention business owners, if they were put into practice.

“We also know that there are many individuals and groups across civic Scotland who share our concerns.”

The financial memorandum can be found at https://t.co/pnOrN6Y0HV