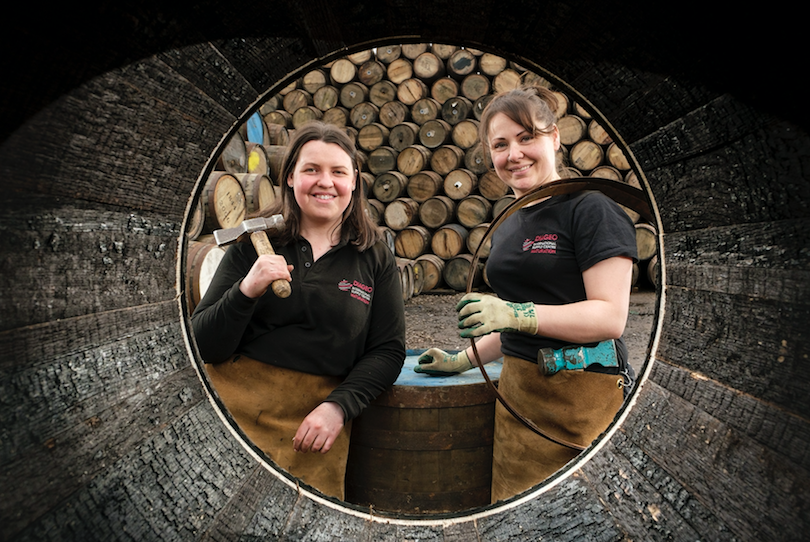 Young whisky workers Angela Cochrane and Kirsty Olychick are breaking down the gender barrier and blazing a pioneering trail in a male-dominated trade.

Recruited by Scotch distiller Diageo at its Cambus Cooperage in Clackmannanshire they are the first female coopering apprentices in the industry.

The news marked the start of Scottish Apprenticeship Week and an announcement from the Holyrood government that more than 1,300 Graduate Apprenticeship work-based learning opportunities will be created across industry over the next 12 months, against last year’s achieved target of 800.

Diageo, which is committed to achieving gender balance as well as hiring young apprentices, celebrated another diversity break-through last year when Rebecca Weir became the first female apprentice at the company’s Abercrombie Coppersmiths.

Angela and Kirsty are part of team of 16 coopering apprentices in the Coopering School at Diageo Cambus. The physically demanding four-year apprenticeship, which integrates theory with hands on experience, allows the apprentices to master the traditional hand-craft skills of the cooper.

The growth of Graduate Apprenticeships supports the Scottish Government’s ambition to create 30,000 apprenticeship jobs a year by next year. Fair Work Secretary Derek Mackay said: “Apprenticeships are a vital piece of the jigsaw to improve Scotland’s productivity, benefitting individuals, employers and the wider economy. That is why we are investing in more apprenticeship opportunities than ever before, ensuing more people benefit from work-based learning.

Access to Graduate Apprenticeships has also increased through provision, with opportunities available for the first time through University of Aberdeen.

“Scottish apprenticeships now allow employers to introduce young people to their business while they are still at school and keep them in their workforce until they are degree qualified.”