Your chance to celebrate the best of Scottish beer 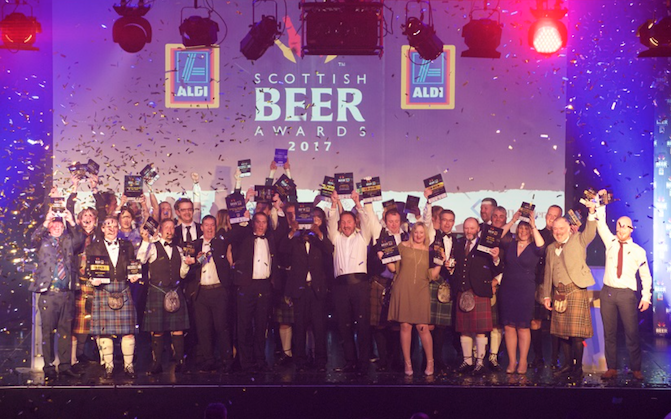 The national awards programme for Scottish brewing has opened for entries in the fourth annual competition which promotes Scotland’s growing reputation as a global centre in the production of high-quality beers.

The competition which last year judged 296 different beers brewed in Scotland is judged by a panel of over 30 brewing and business experts from across the UK.

Breweries have until the 2 May to consider which medals they will be going for with seven business categories to choose from and 12 product categories including Best Lager or Pilsner, Best IPA and Best Pale Ale.

To qualify for the taste competition, each business must enter at least one business category with a written entry which explains the individuals behind the business and demonstrates how brewing businesses are developing their own strategies for success.

The Scottish Beer Awards are sponsored by ALDI for a fourth year, having established a firm commitment to the Scottish brewing sector.

Graham Nicolson, group buying director, ALDI Scotland commented: “We are proud to continue championing the Scottish brewing industry.  Our regular Scottish Beer Festivals strive to showcase the high quality beers that are brewed in Scotland and allow us to offer breweries from across the country the opportunity to secure significant retail listings.

“We are thrilled to continue our headline sponsorship of the Scottish Beer Awards as we celebrate our 25th anniversary in Scotland. We truly believe that the quality of beer produced in Scotland gets better each year and we are confident in the continued growth of this sector.”

Last year Edinburgh’s Stewart Brewing was presented with the ultimate award of the night, Scottish Brewery of the Year, after a phenomenal year of growth in turnover, exports and product development.

Stewart Brewing also walked away with awards for Growth Business of the Year and two taste award medals for its Corpse Reviver and Cascadian beers.  Another big winner was Fierce Beer from Aberdeen who triumphed in the hotly contended taste awards, winning four gold medals and one silver medal.

The judging panel is chaired for a fourth year by Hilary Jones, the former president of the European Brewery Convention and chairman of the Brewing Industry Leadership Group, a new industry body set up by Scotland Food and Drink which is aiming to grow the Scottish brewing sector into a £1bn industry before 2030.