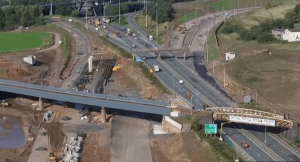 Scots are increasingly turning to their cars in spite of campaigns encouraging greater use of public transport.

Over the past five years road, air, rail and ferry traffic have increased while bus passengers and cycle traffic have seen a decrease.

There were 48 billion vehicle kilometres travelled on Scotland’s roads in 2017, a 3% increase on the previous year.

The number of commuters travelling by car or van rose slightly to 67.7% last year, while the number taking the bus fell to a record low 9.8%, statistics which may influence those councils considering the controversial car park levy.

Despite frustrations over delays and the rising cost of rail travel there were 97.8 million passenger journeys on ScotRail services in 2017/18, an increase of 4% since 2016/17.

There were 28.8 million air passengers at Scottish airports in 2017, an increase of 7% in the last year.

The publication can be accessed online at https://www.transport.gov.scot/our-approach/statistics#42763