Shop vacancies rise in Scotland amid call to curb costs 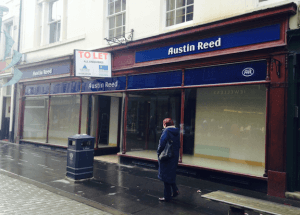 Shops are falling vacant at a faster rate in Scotland compared to the rest of the UK with almost one in eight unites now empty.

The data came as figures also showed the number of consumers visiting shops in Scotland declined by 1.9% on the year, a lesser decline relative to a year ago when it fell by 4.6%. Footfall fell both on the high street by 3.7%, and in retail parks by 0.7%, but grew by 0.7% in shopping centres, the fastest rate of growth in this shopping locations since December 2016.

David Lonsdale, director of the Scottish Retail Consortium, said: “These results offer few crumbs of comfort for those retailers who have yet to fully embrace multi-channel retailing.

“The shop vacancy rate spiked once again, to the highest figure for five years, and the fourth successive quarter that the rate has been above 10%. It is troubling that almost one in every eight retail premises in our town centres now lies vacant, more so with retailers’ business rates bills set to escalate by a further £13.2 million this coming April.

“Whilst shopper footfall recorded its best performance for five months, offering a glimmer of light, the fact is it still contracted compared to a year ago, albeit at a less pronounced rate than over the past quarter and indeed year as a whole.

“This is further proof of the profound transformation affecting the retail industry, due to changing shopping habits, rising cost pressures and becalmed consumer spending.

“Retailers and shopping destinations are clearly going to have to work harder to attract custom through a blend of improvements to service, experience, pricing and promotions. Policy makers can play their part through a more concerted effort to halt and then begin to reverse relentless rises in costs.”