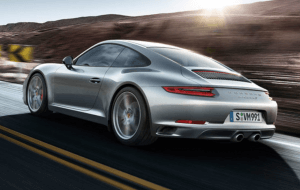 Luxury car maker Porsche is warning that UK customers might have to pay 10% extra for cars delivered after Britain leaves the EU.

Porsche’s owner Volkswagen has not said whether its other brands, including Audi, Lamborghini, Skoda, Bugatti, Seat, and Ducati might also be affected.

It described the move as “precautionary” and said it needed “comprehensive clarity on the shape of future relations between the UK and the EU very quickly”.

The size of the tariff is in line with World Trade Organisation rules on car imports, which would apply in the event of a No Deal Brexit.

Porsche said: “As one potential outcome of the Brexit negotiations, there is a possibility that a duty of up to 10% may be applied to cars imported into the UK by us after 29 March.

“This is a precautionary step in the interests of allowing our customers to plan ahead.”

The Society of Motor Manufacturers and Traders (SMMT) recently said tariffs could add £1,500 on average to the price of a car imported from the continent

There is some positive news for the City of London with Citigroup reportedly on the verge of a £1.2 billion deal to buy the building in Canary Wharf that houses its European headquarters just weeks before Britain leaves the EU.

It’s been a strong start to the week for Asia markets amid further reports of progress on US-China trade talks.

Both sides are pushing for a deal by 1 March when new US tariffs will be imposed on Chinese goods. President Trump has indicated he could be willing to extend the deadline.

Oil prices rose to their highest levels since November, lifted by OPEC-led supply cuts and US sanctions on Iran and Venezuela.

US West Texas Intermediate  crude oil futures pushed through $56 per barrel for the first time this year, hitting $56.13 a barrel before edging back to $56.02 a barrel early this morning.