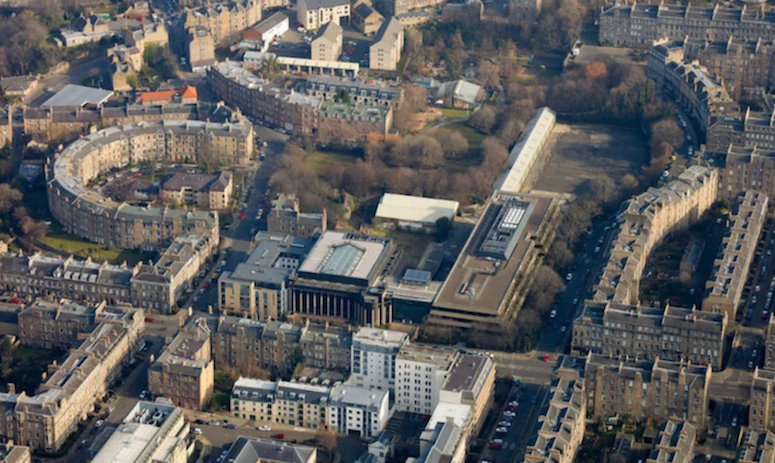 RBS’s former offices are in the centre of the photograph

Royal Bank of Scotland is close to selling its offices in a sensitive part of Edinburgh’s New Town to a property investment company with a track record in shopping centres.

Daily Business has learned that the bank is near to completing a £36 million deal with Orion Capital Partners for the former office and data centre site in Dundas Street.

The 5.89 acre plot, branded New Town North – surrounded by top-end residential property–  is the largest site put on the market in the city for more than a decade and was expected to attract interest from UK and international developers when it was put on the market last October. It is understood 10 Design, a China-based architectural practice with studios in Edinburgh, Hong Kong, Shanghai, Dubai and Miami, has been retained for the project.

A concept master plan has been developed for more than 409,000 sq ft of development, with landscaping and pedestrian-friendly public spaces. There are also 228,000 sq ft of existing high-quality office and data centre buildings already on site, capable of being refurbished or reused.

The emergence of a buyer with a track record of investing in shopping centres in the UK and Europe has prompted one individual familiar with the scheme to suggest other plans may be on the cards. A project that is heavily retail may not prove popular with residents because of the traffic it would generate. 10 Design is more used to creating skyscrapers than working in heritage areas.

Orion, also trading as Orion Capital Managers, is a London-headquartered private equity real estate investment firm which has bought and sold shopping centres in Germany, Italy and Spain, as well the UK.  In 2014 it paid RBS and Delancey £180m for East Kilbride Shopping Centre, near Glasgow.

However, the prospect of a retail development may be less likely in view of softening demand for bricks and mortar shopping units and in recent years Orion has invested in office developments. The move was seen as a representing a shift in strategy for the company.

Royal Bank of Scotland, which is thought to have been working on a plan for New Town North with Michael Laird architects, declined to comment.

* Lothbury Property Trust has bought a Travelodge hotel at Cameron Toll in south Edinburgh for £13.7m.

The number of £1 million homes being sold in Scotland rose by 25% last year, to its highest in a decade, according to new data.

There were 212 million-plus sales in total last year, the highest number since 2008 when 236 deals were closed.

One in five of Scotland’s £1 million plus sales involved newly built houses.

Edinburgh’s New Town and Southside, along with Bearsden and the west end of Glasgow were represented in the top 10. Three in 10 of those sold in Edinburgh were apartments, compared with one in 10 in Glasgow.

The top street for new builds or conversions was The Scores in St Andrews, followed by Woodcroft Road, Drummond Place, Danube Street, Barnton Avenue and Regent Terrace in Edinburgh.