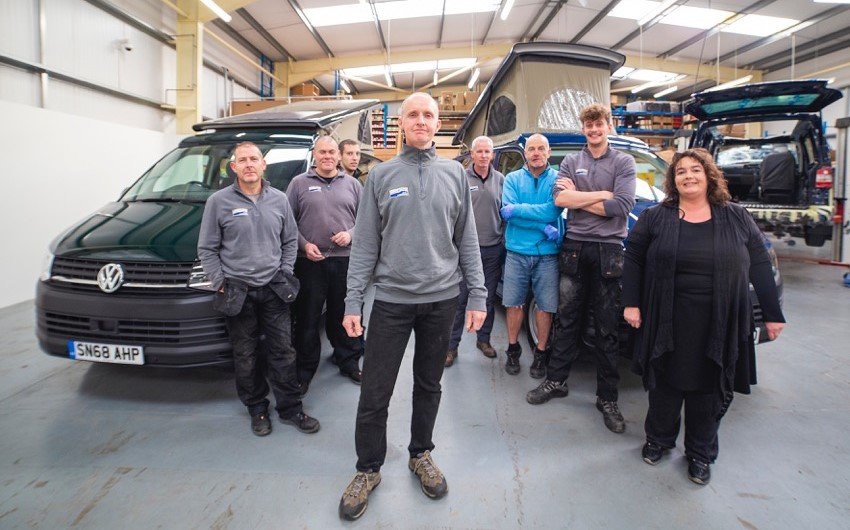 Simon Poole (centre) and employees who now own the business

A company specialising in converting vehicles into campervans says becoming employee owned has contributed to its most successful year of trading.

North Berwick-based Jerba Campervans, which is focused on transforming the Volkswagen T6 model, has seen its turnover rise from £2.2m in 2017 to £2.7m, its best 12 months since the firm was launched in 2005.

After becoming 100% employee owned in January last year, Jerba has also seen productivity increase by 12%. The firm, which has a 15-strong team, has completed a record total of 55 bespoke vehicles in 2018, against 48 in 2017.

Simon Poole, founder and director at Jerba said: “Naturally, we’re thrilled to be looking at these results from the past year.

“We’ve been growing steadily since we first started, but to me it’s clear that the introduction of the employee-owned model last year has given the team and the business a huge boost.

“At the end of the day when I’m locking up, I think about how we’re helping local people to pay their mortgages and enjoy life thanks to the business – and that’s even more satisfying.”

Simon and his wife Cath founded Jerba after a decade of owning and hiring campervans all over the world, before deciding they could improve the design and overall user experience themselves.

The firm is now recognised by Volkswagen as a registered vehicle body builder. The German manufacturer supplies Jerba with the skeletons of the vans, which it transforms into homes on wheels, made to the customer’s specification.

Last year, the husband and wife team transferred all shares into the Jerba Campervans trust. The Trust Board, which is comprised of one employee appointed by them, one elected employee and one independent individual to the business, ensures that the company is being run for the benefit of the employees.

Simon added: “We’re always looking for ways to improve what we do, to be innovative in every aspect and to stay ahead of the game.

“Becoming employee-owned has truly energised the place and as a result, we’ve benefitted from a loyal team of people who have been instrumental in building the business.

“Hopefully with this mindset and drive, we’ll be able to report even greater success this time next year.”