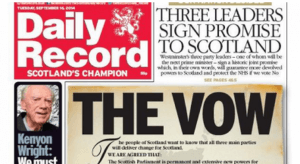 Revenue at Reach, formerly Trinity Mirror, rose 16.2% year on year to £723.9m in 2018 following the purchase of the Daily Express, Daily Star and OK! Magazine.

But like-for-like sales were 6.6% lower as the company continued to experience waning demand for its own print products, and excluding the deal revenue fell by £59m.

Reach fell to a pre-tax loss of £120m, after suffering a £200m blow to the value of its goodwill, publishing rights and titles, down from a pre-tax profit of £82m in 2017. Reach managed to grow like-for-like digital revenue 9.6%, while print advertising revenue fell by 0.5%.

The company, which owns a number of regional papers such as the Manchester Evening News and Liverpool Echo, said: “This reflects the more challenging than expected trading environment for advertising revenue generated locally and the short term uncertainty arising from the UK’s exit from the European Union.”

The company was able to cut its debt in half to end 2018 with a debt of £40.8m. It said its integration of the Express & Star is on track to deliver at least £20m of annualised cost savings by 2020, after saving £3m in synergies last year. Cost-cutting helped it save £20m last year, £5m ahead of schedule.

It set aside £15.8m to settle gender pension pay gap claims and another £12.5m for settling historic phone hacking claims, bringing the total spent on the scandal to £75.5m.

Simon Fox, Chief Executive, Reach, said: “I am pleased with the performance we have delivered in 2018 and encouraged by the stronger finish to the year. We have begun 2019 in a strong financial position with good momentum on the integration of Express & Star and with clear plans for digital growth.”

“We are a very cash generative business. We had a stronger final quarter than expected in print and digital.”

He said around 100 jobs had been shed with the merging of a number of Mirror and Express writing teams, including sport.

“We are bringing teams together to share content, and have opened new digital newsrooms in Edinburgh, Leeds and the Black Country.”