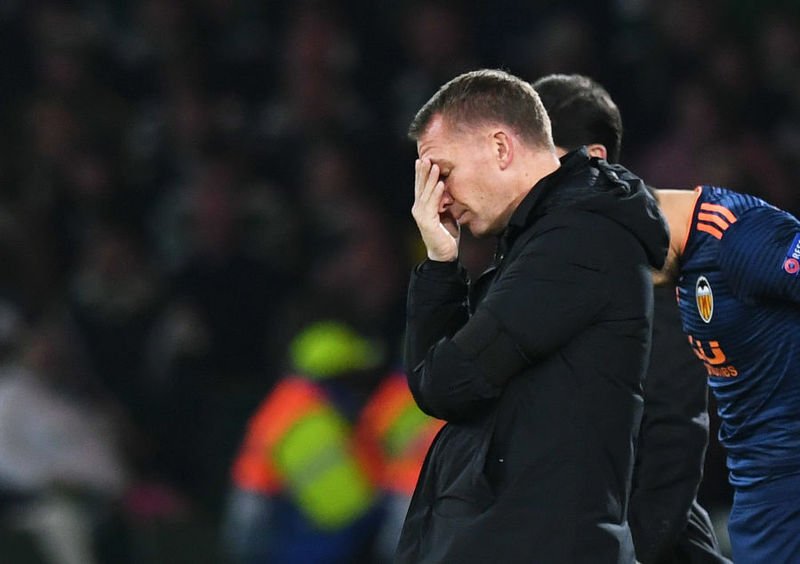 Brendan Rodgers shows his frustration on a night to forget for Celtic (pic: SNS Group)

Celtic have produced many a special European performance at Parkhead but this wasn’t one of them. Not for the first time the Scottish champions found the step up in class from the domestic scene too much to handle, an unusually subdued display leaving them with a mountain to climb in the return leg.

Valencia may have been without a handful of their star men but they weren’t missed as they carved out a two-goal cushion with some ease to take back to the Mestalla. The La Liga outfit had looked comfortable throughout the match and didn’t have to work too hard to get the crucial away goal.

Poor Celtic defending allowed Ruben Sobrino to beat the offside trap to set up Denis Cheryshev for the opener as the interval approached. What was a tough task became even harder when the goalscorer turned provider to set up Sobrino to steer home the second from close range in the 49th minute.

The hosts were rarely seen as an attacking threat, mustering just two shots on target and now have it all to do in the second leg in Spain in their bid to reach the last 16.

The display was a real anti-climax for the Hoops supporters and manager Brendan Rodgers said: “It was a disappointing game to lose considering we made a good start. We were bright, had a good intensity in our pressing and we circulated the ball well.

“It’s a disappointing performance in the end. When you make the number of mistakes we made with simple passes you become a wee bit safe. And that was the story of our game, really. It’s a big challenge for us.”

Captain Scott Brown added: “It was a tough night for us to be honest. We tried to play out from the back but our passing wasn’t the best throughout the whole team. We will go and try and press them high up the park and force them into making mistakes. It just wasn’t meant to be and we will go again next Thursday. We have nothing to lose over there.”

Celtic are not known for their displays away from home in Europe in recent times – Rodgers has just five wins from 20 on the road – and few will be expecting them to reign in Spain next Thursday.

While Celtic were left licking their wounds, there were mixed fortunes for the two English clubs in Europa League action.

Chelsea travelled to Sweden to take on Malmo and came back to London with a 2-1 win, Barkley and Giroud on the mark for the visitors.

Arsenal had Alexandre Lacazette sent off for violent conduct as they were beaten 1-0 by Belarusian champions Bate Borisov, the home side’s first victory over an English side at home in European competition.