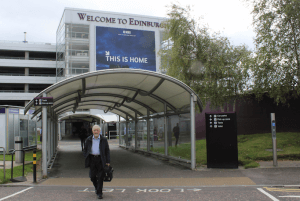 Another hotel is planned for Edinburgh Airport, providing 200 beds and conference facilities adjacent to Ingliston Road.

Applicant for the Aviator Hotel Flowpearl said its plans fit into the wider Royal Highland Centre masterplan and the strategic importance of the west Edinburgh business cluster which includes the airport, the RHC and International Business Gateway.

In a statement it added: “The top-level Aviator Club is designed as a derivative conning-tower, with glazed walls and roof.

“A viewing tower for aircraft against the backdrop of the sky. The glazed and illuminated roof service structure together with the Aviator Club are composed to provide the 5th elevation as a recognisable portal to Edinburgh for air travellers.”

Construction is expected to get under way by 2020.

Edinburgh Airport recording its busiest ever January with 920,474 passengers passing through the airport last month, up almost 10% on the same month last year.

Growth was recorded in both the domestic and international markets at 10.4% and 9.6% respectively.

It comes after the airport recorded its busiest ever year in 2018 with 14.3 million passengers using the terminal – a record for any Scottish airport.

Gordon Dewar, chief executive, said: “To see growth in both our domestic and international market is encouraging and is a great way to start 2019, especially just after we recorded our busiest ever year.

“The international and domestic routes we delivered last year are proving popular and we have announced further new routes this year which we are confident will maintain our strong numbers. We are also seeing additional frequency being added to routes such as Doha with Qatar Airways and Istanbul with Turkish Airlines, a clear sign of confidence in Scotland’s busiest airport.

“Clearly growth is a positive, but we cannot afford to settle for where we are – we must be outward looking and attract more new airlines and destinations, something which is being restricted by the reluctance to act on APD. We have to remain competitive and seize on all available opportunities, especially as we wait on clarity around Brexit.”