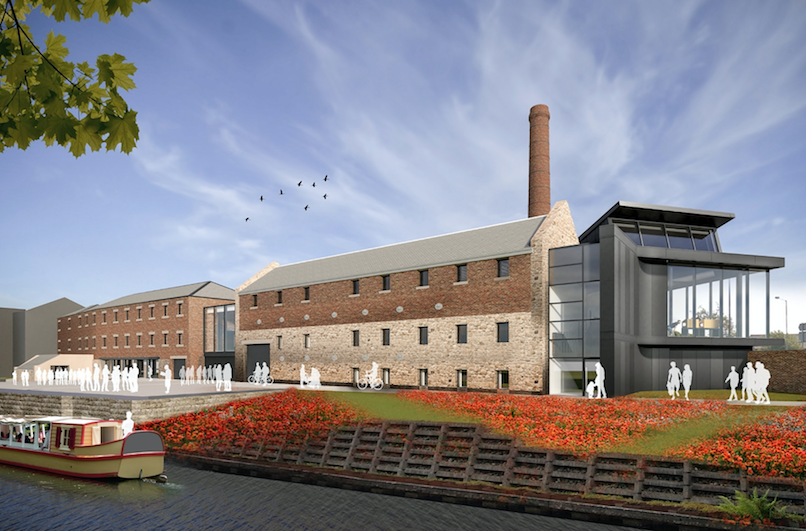 Disillery aims to be a major attraction

Ian Macleod Distillers has been granted planning permission to start work on its multi-million pound redevelopment of the Rosebank Distillery in Falkirk.

The distillery will revive a single malt whisky termed the ‘King of the Lowlands’. Rosebank ceased production in 1993 when former owner UDV (now Diageo), mothballed the site and its maltings were converted into a restaurant.

After 25 years of lying dormant, the distillery will generate 25 full time equivalent jobs when it commences distillation and opens to visitors around Autumn 2020.

The distillery will have a an annual production capacity of up to one million litres of alcohol. The iconic Rosebank chimney will remain in place and other historically significant canal side buildings will be retained and refurbished for use as a visitor centre, tasting room, shop and warehouse space. Situated on the banks of the Forth & Clyde Canal, it hopes to attract around 50,000 visitors a year to Falkirk.

Leonard Russell, managing director of Ian Macleod Distillers, said: “To bring back to life an iconic distillery and quintessential Lowland single malt is truly a once in a lifetime opportunity.

“Our investment goes beyond production. We’re proud to be investing in Falkirk by adding to the town’s flourishing economy and tourism scene with a new Rosebank Visitor Centre, to help tell the story of this remarkable whisky.

“Rosebank Distillery has a very special place in Scotland’s whisky heritage and we’re committed to ensuring this remains the case. We will strive to replicate the unique Rosebank style by once more employing the unique techniques of triple distillation and worm tub condensers, for which this iconic Lowland single malt is famed.”

“We would like to express our sincere gratitude to Falkirk Council and Scottish Canals for their support of our vision to revive Rosebank Distillery. The backing from both parties has brought our vision to life and enabled the smooth running of this initial phase of the project. We look forward to continuing these relationships as we progress through the next stages.”, added Mr Russell.

Councillor David Alexander, Falkirk Council’s spokesperson for economic development, said: “It’s great to see the Rosebank Distillery coming back into use and this large investment on the site is to be welcomed.

“We’ve worked closely with Scottish Canals and Ian Macleod Distillers to ensure that this site can become a great tourist attraction as well as bringing investment to the local economy and new employment opportunities. We look forward to seeing this historic site transformed and producing whisky that will be recognised across the world.”

Ian Macleod Distillers also acquired the Rosebank brand and last remaining stocks from former owners, Diageo, in October 2017. The company expects to use this limited Rosebank whisky for a small number of releases from 2019, distilled in the last few years before Rosebank Distillery closed.